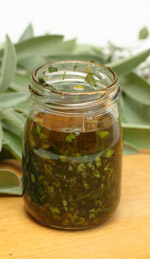 It’s hard to identify the age of nature’s medicine chest. Plants and trees have been healing aches and pains as well as wounds and scratches for centuries. Oils from the plant kingdom have balanced the central nervous system, healed the intestinal system, and stimulated the circulatory and respiratory systems long before people wrote about those accomplishments. Sage oil is one of these ancient oils that has assisted humans in healing and living well for many thousands of years!

The miraculous properties of sage oil, along with other essential oils, were verbally passed down from generation to generation around the Mediterranean region. Through the years Dioscorides, Galen, and Pliny all recommended sage as a diuretic, and for its hemostatic, emmenagogue, and tonic properties.

Before the centuries were marked with double digits, monks kept sage in their medicine cabinets. The Greeks called it sphakos, and Romans called it salvia. Charlemagne recommended it for cultivation in France decades later, and the British started using it in food recipes before there was a Britain.

Carl Linnaeus, the Swedish botanist, was the first Western scientist to describe sage in 1753. Salvia officinalis was the official name in those days, but it has been classified under many names since then. Long before this, though, sage was used to ward off evil spirits, cure snakebites, increase women’s fertility, and as a local anesthetic.

During the Middle Ages, sage and three other herbs were combined and used to fight symptoms of the plague. These days sage is grown and harvested all over Europe and other continents. Sage oil and leaves are used in culinary applications as well as for healing a variety of ailments, including excess perspiration.

The National Institute of Herbalists sent out a survey to its members in the UK and asked them to comment on their experiences with sage oil. Forty-nine people responded. Forty-seven of them used sage oil in to assist with hot flashes and night sweats, and for its effect on memory and brain functions (which are enhanced even more when combined with rosemary and/or labdanum oil).

In an unpublished German study, it was found that sage relieved excessive perspiration by over 70%. The study was based on a group of people suffering from bouts of heavy sweating brought on by nervous tension and excitement. For more information on using sage oil to treat excessive sweating, check out this video!

Mouth, throat, and gastrointestinal issues such mouth ulcers, infected gums, dental abscesses, and throat infections are also treated with sage oil. The essential oil of sage is used in aromatherapy to treat salmonella and Escherichia coli as well as yeast infections like Candida albicans and filamentous fungi.

Modern 21st-century folks call sage oil ‘the ancient remedy with modern day effectiveness.’ This is a very apt description indeed! Sage oil is immensely beneficial for such a wide range of ailments that it truly is a must have in any medicine cabinet, ancient or modern.