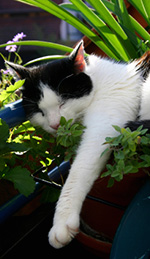 Catnip (Nepeta cataria) is a perennial herbaceous shrub in the mint family that’s sometimes known as the cat’s best friend. Anyone who’s seen a cat batting around toy mouse or ball stuffed with catnip knows that many cats simply love this herb, and will eat or even roll around in it whenever they get the chance. Catnip has a reputation for making cats playful and silly, but what many people don’t know is that catnip isn’t just for cats: catnip herb and catnip essential oil have also been staples in European herbalism and are still used in alternative medicine today.

Sometimes called catmint or catswort, the catnip plant has oval or triangular leaves and small but showy pale purple or white flowers. It is native to all of Europe and parts of southwest and central Asia as far east as India. Before trade with China introduced the rest of the world to black tea, a tea made from catnip leaves was a favorite in England, where it was consumed as a refreshing summertime beverage as well as a medicinal tonic for digestive cramps and spasms [1]. Catnip tea is also high in vitamin C and may have a mild sedating effect similar to chamomile tea [1]; a cup of catnip tea can be just the thing to soothe the mind before bedtime.

Medicinally, catnip essential oil is used in aromatherapy as a mild analgesic and anti-inflammatory [2], reflecting the traditional use of catnip leaf as a poultice for minor wounds and inflamed or irritated skin. Catnip essential oil is also sometimes used in formulations for toning the skin [2], and some herbal vendors sell a tincture form of the dried herb for treating upset stomachs and flatulence [3]. More recently, some studies have indicated that catnip oil may be an overlooked insect repellent: studies performed on nepetalactone, one of the main compounds in catnip oil, have shown that it is more repellent to mosquitoes and cockroaches than the chemical repellent DEET [4].

Though generally considered safe and nontoxic, catnip essential oil may irritate sensitive skin and is best used in a blend with other essential oils. Here’s a sample recipe for a fragrant and effective insect repellent blend: combine 3 to 5 drops of catnip oil with 3 to 5 drops of cedarwood, citronella, and lemongrass oil. Diffuse outdoors in a burner or diffuser to repel biting insects while scenting your patio or porch with uplifting lemongrass and earthy cedarwood.