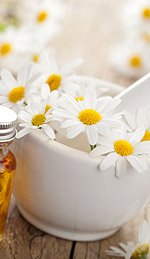 The medicinal benefits of Roman chamomile are well known in the Mediterranean region. This essential oil has been a nerve soother for over 2,000 years. The oil has always been a highly prized treatment to relieve an assortment of body ailments such as cramps and spasms. The Greeks and the Romans used it when mild shock developed from trauma. They also blended it with ginger when belly-aches interfered with daily activities.

Roman chamomile is currently listed in the British pharmacopoeia as a treatment for nausea, anorexia, dyspepsia, vomiting in pregnancy, and flatulent dyspepsia associated with mental stress. This essential oil is also a popular skin treatment and is used in hair care products as well.

The cosmetic uses for Roman chamomile oil are not new discoveries; the ancient Greeks blended it with other essential oils like lavender, jasmine, and tea tree oil and developed an elixir that could stimulate hair growth as well as maintain a healthy head of hair.

The Greeks also rubbed the oil into the solar plexus to relieve tension and alleviate stomach issues. The skin-regenerating and central nervous system-balancing qualities of the oil have been written about for centuries. Chamomile essential oil was combined with vanilla and lavender oil and given to children to relieve irritability and nervousness. This combination is still used today to help children settle down and focus.

The traditional uses for Roman chamomile oil include relieving anxiousness and stress, and it is use to treat cuts and scraps because of its antiseptic and skin-healing abilities. This ancient remedy is one of the safest oils used in aromatherapy so parents have no trepidations when it comes to using it to treat children who have skin or stomach issues.

Since the oil has such a calming effect on the nervous system, many people who suffer from insomnia use it regularly to get a good night’s sleep. The sweet aroma stimulates the senses, which allows tension to be released. Some people call it a sedative and rub it on the back of the neck and on the temples before visiting the dentist, while other people blend it with sweet marjoram to relieve joint and muscle pain.

Roman chamomile blends with other essential oils like cinnamon, bergamot, clary sage, blood orange, lavender, redwood, sandalwood, oakmoss, lemon, neroli, and sweet marjoram, so there are many aromatherapy blends that include Roman chamomile which may be used for numerous internal and external applications.

The oil from Chamaemelum nobile has gained a respected reputation as a natural non-habit-forming sedative that can relieve minor pains, calm the nerves, and instigate a good night’s sleep. In fact the Romans and the Greeks called it the earth apple for sleep. We’re sure you’ll find it just as valuable as they did.