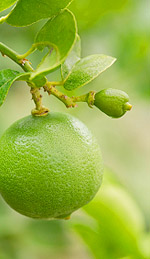 Limes are native to Asia, but many warm countries around the world grow limes in modern times. For example, Italy has been harvesting limes for hundreds of years, and the lime tree is even a part of Greek myth! Lime trees usually grow next to oak trees, so when the Greek gods transformed Philemon into an oak tree and Baucis into a lime tree (tilia tree) so they could live side-by-side for eternity, the lime was immortalized in Greek mythology.

India is the lime’s original home, and the trees were first introduced to Europe by the Moors in the 16th century. To the Celts, the lime tree was a symbol of justice and fairness, and they were planted by royal decree along roadsides so that the lime harvest would be plentiful. That’s when the medicinal properties of the lime were first discovered in Western civilization, but in India lime essential oil had long been known as an important wellness remedy, especially for times when emotions drained the body of energy. Later, it was discovered that oil from both lemons and limes played an important role in controlling scurvy outbreaks, so the Spanish brought the trees to the Americas on their voyages to this new world.

The tangy and sweet-scented lime oil is known for its ability to interact with the nervous system. The main constituents in lime oil are limonene, myrcene, linalool, a-pinene, b-pinene, terpinolene, fenchone, 1,8-cineole, citral, borneol, and traces of geranyl acetate and neral acetate, which means the therapeutic properties are astringent, bactericidal, antiviral, febrifuge, aperitif, haemostatic, disinfectant, and restorative. Lime oil is filled with antioxidants that attack free radicals, which can create a variety of health issues.

Lime oil can help ease the pain of toothaches, and it strengthens the gums and teeth. It can help treat colon, urinary, and kidney infections. Lime essential oil protects the body from the viral infections that cause measles, chicken pox, mumps, and the common cold. It activates the secretion of digestive juices, so it is an aperitif or appetizer.

A lime oil massage or bath will relieve joint and muscle pain, and will interact with cellulite so that cells can regenerate. And the antidepressant properties of lime oil make it a wonderful oil to inhale, especially if stress and daily challenges have an impact on the nervous system. The aromatherapy vapor will stimulate the immune system and energize the thought process. This combination of effects brings a new sense of being into focus. Parents often give children lime oil if they are experiencing difficult social situations that drain their energy. The oil is gentle enough for use with children, and kids love the sweet, soft citrus scent, too!