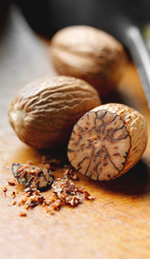 Nutmeg is primarily used as an aromatic spice in foods. But, it has also been indicated for various medicinal purposes including treatment of psychosis, flatulence, and diarrhea.  However it has also been recorded as an aphrodisiac and hallucinogenic when taken in high quantities.  Oddly, there is some indication that it is also a naturally occurring pesticide.

It is believed that nutmeg originated in the Banda Islands of modern Indonesia (the “Spice Islands”), or what is known as the Maluku Province of Indonesia.  Historically in ancient Egypt and Rome nutmeg was used as incense for burning – it was a spice for the privileged as it was quite costly at that time [1, 2].  And in medieval times, nutmeg was an expensive flavoring, medicinal and preservation agent in Europe [6].

It is believed that nutmeg was first brought to Europe by the Arabs in the 12th century and it is known that during the Middle Ages the Arabs sold nutmeg to the Italians as a pricey and luxurious item.  During the course of the Portuguese expeditions, the Portuguese went to Indonesia and came away with control over the Indonesian nutmeg trade in the sixteenth century – 1512, to be specific. [1, 2]

Sometime during the seventeenth century the Dutch dominated the nutmeg trade and later Britain monopolized the trade, having acquired seedlings from the Banda islands themselves – clearly it was a desirable commodity even back then!  There was actually a period, prior to British dominance of the trade, when the English believed nutmeg could ward off disease – specifically the bubonic plague — which might give us some understanding as to why they went to Indonesia to get the seedlings in the first place.

However, in 1576 there was a case reported in England of a woman who ate 10-12 nutmeg nuts and was intoxicated; in another case, someone became lethargic upon eating three nuts.  Cases like these and others have contributed to a better understanding of nutmeg’s effect on the central nervous system – including its hallucinogenic and euphoria-inducing properties.  Even the autobiography of Malcolm X speaks of his use of nutmeg while in prison for its effects on the central nervous system – my, it certainly was a popular spice!  These cases along with others are probably what prompted the studies that lead to our now thorough understanding of how to best use nutmeg. [1, 2]

Fortunately, today nutmeg in all forms is financially approachable and has adopted an array of different uses – including, but not limited to olfactory, food and medicinal uses.  The essential oil of nutmeg is acquired through a steam distillation process and is pretty much colorless, although it could be sometimes said to have a pale yellow hue.  It is the oil that can take the credit for the spicy nutmeg smell that nutmeg is so well known for.  The oil contains 60%-80% d-camphene as well as d-pinene, limonene, d-borneol, l-terpineol, geraniol, safrol and myristicin [6].  It is the myristicine that is mostly responsible for the psychoactive properties of nutmeg [2].

While it is important to know that nutmeg is not used as a hallucinogenic in traditional Indonesian culture, it is still no wonder that nutmeg has been traditionally used to combat anxiety and psychosis, given how it has been known to act on the central nervous system with euphoric and hallucinogenic properties.  But it has also been traditionally used for many other purposes, such as combating diarrhea, flatulence, rheumatism, cholera, stomach cramps and nausea.  While nutmeg is traditionally used for aiding the digestive and nervous system, it is probably best known for its aphrodisiac properties – that’s right, nutmeg has become known as a spice that really does spice things up [2]!

Nutmeg is probably most interestingly used to treat psychosis.  Why this is so interesting is because nutmeg itself is a psychomimetic substance and has been abused as such by adolescents, students and prisoners.  For something to be used as a psychomimetic means that the substance “mimics” psychosis, and for something that mimics the very symptoms of something it is used to treat – namely, psychosis – is indeed very peculiar.  Although it is probably worth noting that the not so wonderful taste, limited potency, and unwanted side effects make its abuse relatively rare in comparison to other substances [2].

Nutmeg essential oil isn’t just used for the medicinal or pharmaceutical purposes explained above.  It is also widely used as a food flavoring in meat preparations, liqueurs [1], syrups, drinks, baked goods and sweets, and of course we all know the wonderful flavor it adds when sprinkled on top of eggnog [6]!  It has also been widely used in ancient and current Indian culture as well as in other cultures as a scent for perfumes [4].  Another lesser-known use of nutmeg is as a pesticide due to its quantity of myristicin (the main compound in nutmeg essential oil), which is a naturally occurring  type of pest repellant. 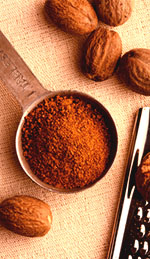 A lot of food spice blends contain nutmeg, such as apple pie and pumpkin pie spice mixes. Additionally, however,  there is one study indicating that nutmeg and camphene oil, when inhaled in combination, may contribute to the alleviation of respiratory conditions.  In the study – which was unfortunately done on lab rabbits – when nutmeg oil was inhaled it acted on the bronchomucotropic activities of the respiratory system, that is to say that the mechanisms of mucus augmentation was no longer active [3].   Additionally, in combination camphene and nutmeg inhalation may act as a pharmacological expectorant [3] – which is just a scientific way of saying that something clears up mucus and lubricates the irritated respiratory tracts in the process [5].  However, further study that needs to be done on this topic before anything can be said for certain. 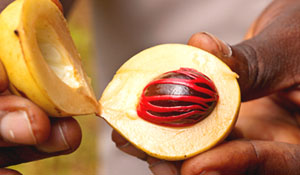 Although nutmeg has traditionally been used for medicinal purposes, there aren’t any recognized medicinal uses of the essential oil. It is also important to note that although lab tests have indicated central nervous system intoxication in lab experiments, the same effect has not been yet seen in humans.  It is the compound myristicin that acts as a point of concern in some cases as it is possible that it may act as a serotonin receptor agonist (activates the receptors) and as a hallucinogenic.  However, the amount of myristicin in nutmeg is so low that it’s unlikely to have any negative effect – although doses of myristicin as low as the equivalent of two whole nutmeg nuts did induce episodes of reduced alertness [2].

As always it is wise to err on the side of caution with essential oils, especially those that do not have documented medicinal qualities.  However, when it comes to nutmeg it is certainly safe to say that its use as a spice is more than okay and is definitely a very desirable addition to many wonderful recipes and aromatic preparations.