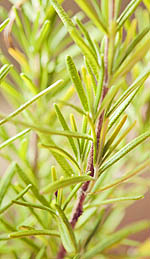 Rosemary essential oil is most famously known as a memory stimulant, but is also used as an antimicrobial and an antibacterial, to aid muscle tension, and to treat arthritic conditions. Additionally, the rosemary plant has also been traditionally used for its fragrant aroma and in cooking as a flavouring agent. Read all about the Scientific Evidence for Essential Oils elsewhere in this blog.

The rosemary plant is scientifically named Rosmarinus officinalis and has a beautiful flower that is either pink, purple, blue or white.  The rosemary plant is part of the evergreen family with needles and a robust lifespan – making it one of the easier herbs to grow year round and in tough climates [6].

Rosemary has a bit of a mythological origin: it played a role in the conception of Aphrodite – having been draped around her neck as she rose from the sea – and given that she is the goddess of love and beauty, this is very fitting for the beautiful flowering rosemary bush.  This mythological account tells us a bit about how it got the name rosemary as well, since “ros” means dew and “marinus” means sea, so that Rosmarinus means “dew of the sea”.  Aside from its mythological origins indicating its ancient use in Greece and other parts of the Mediterranean, it is noted that it was quite popular throughout ancient Egypt and is famously referenced in Shakespeare’s Hamlet [6].

As mentioned above, rosemary is famously and historically known for its ability to enhance the memory functions of our brains.  It is known that the Egyptians used the rosemary plant both physically and symbolically during weddings and funerals as a ceremonial plant meant to represent remembrance.   There has even been a series of studies and experiments that have proven rosemary’s link to memory enhancement – including one study out of Northumbria University that concluded that rosemary increases the functioning of long-term memory by up to 15% [2].  Additionally, rosemary is used more generally as a mental stimulant and students could and do use rosemary inhalants during exams to reap better results [1].

But, what could account for this enhancement of memory and mental clarity? There isn’t much literature circulating on the exact physiological reasons for rosemary’s ability to enhance memory and stimulate mental processes – but, there is one factor that might have something to do with it.  There is some indication that rosemary can increase the production of Nerve Growth Factor [6] – which is a secreted protein used by the body to aid in the growth, maintenance and survival of key nerve cells [5].  This enhanced growth of brain cells could of course offer some insight into how rosemary enhances memory, especially considering that the Northumbria study only found an increase in long-term memory and actually found no increase in short-term or working memory.

Other medicinal uses of rosemary essential oil include employing the oil as an antioxidant, antibacterial [4], and for its antimicrobial activity against certain harmful microbes – particularly with regard to its use in food packaging and natural preservative methods [3].   Additionally, it has many extra beneficial uses including possibly preventing hair loss and stimulating hair growth, treating jet lag, muscle tension and arthritic pain [1].

Of course, let us not forget rosemary’s use as a spice in many of our favourite dishes and the desirable aroma it exudes.  There is even some implication that it could aid in digestion, which gives us even more of a reason besides its great flavour to add it to our favourite dishes [1]!

Because rosemary can be quite a strong essential oil, it is best to blend it with carrier oils when using it to massage muscles or to rub into your scalp as a hair growth aid.  For hair growth, jojoba oil is probably the best option as a carrier because it has similar properties to our natural skin oils that contribute to its easy absorption, allowing rosemary essential oil to penetrate tissues deeply.  Rosemary oil can also be blended with full fat milk into a warm tub of bathwater for a deeply soothing bath [1].

However, like most essential oils, rosemary essential oil can be quite strong and so when using as a massage or otherwise it is important to only use a few drops and to use along with carrier oils or other mixing agents that will dilute its strength [1].

Additionally, because rosemary essential oil is an incredibly stimulating oil, it should not be used by the elderly, pregnant women or by those who have high blood pressure [1].

As we know rosemary is a very popular spice used in many delicious and nutritious dishes – so, speaking relative to other oils, it is fairly benign and a good essential oil to begin your journey toward alternative medicine.   On a spectrum of fairly safe essential oils like lavender or spearmint, to very strong oils that can be potentially dangerous when used incorrectly, rosemary probably stands on the softer side of the spectrum — and given its memory stimulating qualities, who wouldn’t want to get started with rosemary essential oil!