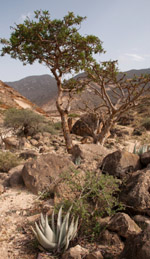 A ceremonial incense of divinity, the tree resin Boswellia serrata (frankincense) and its essential oil derivative have historically been used to ward off evil spirits and connect humans to divine spirits and realms.  It is primarily a popular incense and perfume, but is also used in cosmetics and skin treatments with some indication that it may fight cancerous cells – although this is a claim that has yet to be affirmatively and scientifically proven.

Background: Another name for frankincense is olibanum and this refers to the aromatic resin that is retrieved from trees of the genus Boswellia. Frankincense essential oil is derived from the Boswellia resin.  There are only four species that are known to produce what can be considered real frankincense resin, and the resin is produced by these trees in varying quality levels.  Adding to the romanticism of frankincense is the origin of its name, having evolved from the Old French “frank encens” – which is directly translated as “high quality incense” [6].

Frankincense is famously well-known, especially if you’ve grown up in a Christian, Christmas-celebrating household: in the bible frankincense is reported to have been carried to baby Jesus by the three wise men as a gift in honor of his birth [6].  In fact, frankincense has also historically been one of the most popular essential oils – having been used religiously or spiritually in ceremonies and celebrations throughout many ancient cultures. Additionally, frankincense is an incense consistently found throughout historical religious and meditational practices of the Western world. Just about every ancient western culture is known to have used frankincense ceremonially – particularly throughout Sumeria, Babylon, Egypt, Assyria, Greece and Rome [2].

It is believed to have come to these major social or cultural centers through trade with the Arabs, Somalis and Bedouins – who purportedly obtained the resin from small desert trees in Saudi Arabia and Somalia and had been doing so for thousands upon thousands of years [2].

Use: Traditionally, frankincense is probably most widely used as an incense – in fact the word was essentially synonymous with incense throughout Western cultures.   “It was the scent of purification”, burned to ward off evil and to open oneself to divine presences – enabling a connection with higher spirits and a level of contemplation necessary for these divine connections; frankincense represented a divine connection between heaven and earth [2].

This spiritual affiliation of frankincense with the world of divinity overlapped with its use as a perfume and its use in skin care regimens.  The ancients as well as people today have used frankincense widely within their hygiene practices, and in some cultures this is correlated with its use to ward off illness and bad energy. As a kind of aesthetic extension of its spiritually related purpose, the resin was also combined with kohl and used as black eyeliner to ward off “the evil eye” and was even used in a special concoction that removed unwanted hair [2]!

It has also been used in Asian, African and Ayurvedic traditional medicine to treat several digestive and skin-related health conditions as well as arthritis, wounds, female hormonal balance and air purification [6]. 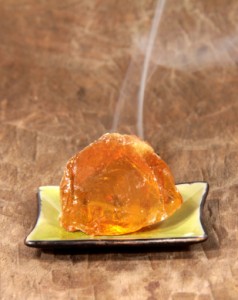 Blending: Frankincense is a component of “kyphi” – a house incense within the temples of Heliopolis, burnt every sunset to honor the evening departure of the sun god.  Frankincense can also be found along with about 16 other ingredients in sacred incense recipes of the  Talmud.  One particular biblical recipe includes stacte (might be myrrh), onycha (musk), galbanum and frankincense [2].

Safety: While the resin of frankincense is reported to be edible [6] it is extremely important to consult with a physician before ever ingesting essential oils in any form.  Essential oils can be incredibly potent – and even if they yield benefits in small doses, too much can often be harmful and some aren’t supposed to be ingested at all.  If they are ingested it is often under the direct recommendation or oversight of a health practitioner that is specialized in the use of natural health remedies.

Additionally, although there are several studies linking Boswellia resin and essential oil to the termination of cancer cells, it has not yet been proven conclusively and it would be best to discuss such a topic with a health practitioner.

The online resource Pubmed perhaps says it best: “limited conclusions can be drawn from the preliminary findings of this laboratory study as it is yet to be published in a peer-reviewed journal. And some of the claims should not be taken at face value; in particular the press release’s claim that frankincense has no known side effects. Such claims would need rigorous scientific evaluation before they could be verified [5].”  However, it is worth noting that frankincense has since been discussed in peer-reviewed journals and other scientific platforms that were discussed briefly above.