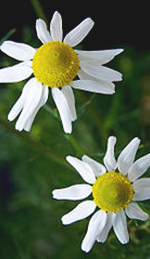 The flowering plant commonly known as chamomile has a rich and varied history in European herbalism. For one thing, there are actually two distinct species that share the common name chamomile. In this article we’ll be discussing German chamomile (Matricaria chamomilla), an upright flowering annual native to Europe and temperate Asia. Its cousin, Roman chamomile has many of the same properties but a slightly different composition of compounds in the essential oil. For instance, German chamomile essential oil is valued for its high concentration of chamazulene, an anti-inflammatory compound that gives German chamomile oil its dark blue color [1].

The ancient Greeks coined the word chamomile from two different Greek words, kamai meaning “earth” and mélon meaning apple; so chamomile can be literally translated as something like “earth-apple”, a reference to its similar fragrance and flavor [2]. And like the saying, “an apple a day keeps the doctor away”, they believed that chamomile also had many medicinal applications: it was even listed in Dioscorides’ Materia Medica, the first compendium of Western herbal medicine ever compiled.

Like the closely related Roman chamomile, German chamomile oil may be a mild relaxant and nervine, and is commonly inhaled to relieve states of nervousness and encourage sleep [6]. Aromatherapists also use German chamomile oil to cleanse the liver, as a mild laxative, and as a sinus decongestant [2]. A hot tea made from either species of chamomile flowers can also clear nasal congestion within 10-30 minutes after consumption [7].

Although originally native to Europe and temperate Asia, German chamomile has also been naturalized to North America and Australia, where it sometimes grows in cultivated fields as a weed. German chamomile seeds require open soil to germinate and survive, so the plant tends to stick close to areas of human settlement such as roadsides, farm fields, and even landfills. With so many therapeutic benefits, this hardy, adaptable plant is sure to be sought out for generations to come!