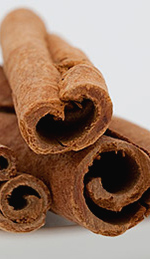 Cassia (Cinnamomum cassia) is often used interchangeably with cinnamon as a spice, flavoring and fragrance, and it has many of the same therapeutic properties as cinnamon essential oil. Many people confuse these two spices due to the common practice of labeling ground cassia as cinnamon in grocery stores. However, when choosing between cassia essential oil and cinnamon oil, it’s important to know the species you’re getting because these two related plants have different strengths in aromatherapy.

The cassia tree is a small evergreen native to China and Burma, and cultivated alongside cinnamon (Cinnamonum zeylanicum) in the east and southeast Asian countries of Taiwan, Indonesia, Malaysia and Sri Lanka. Cassia trees have shiny, almond-shaped leaves and thick, reddish brown bark that is ground to make a spice similar in flavor to cinnamon [1]. The bark is also the part of the plant that is steam distilled to produce cassia essential oil.

Cassia often gets little mention in the history of the spice trade, even though it was and continues to be a major competitor of cinnamon. Old Testament scholars have speculated that cassia oil may have been one of the ingredients in the holy anointing oil given to Moses, along with frankincense, myrrh, and of course, true cinnamon [2]. Some scholars have also suggested that the Hebrew word for cassia means “like cinnamon”. In ancient times, cassia probably made it to the Middle East through trade with India.

Because cassia is more cost effective to mass produce than cinnamon, it’s used frequently in commercial flavoring for everything from candy to baked goods to savory curries. Cassia oil is also added to mouthwashes as an antiseptic; this property also makes cassia essential oil an affordable choice for aromatherapy treatments targeting infections [3]. In addition to its antiseptic action, cassia oil is wonderfully warming and stimulating: metabolism and digestion both get a boost when cassia oil is inhaled [3]. One reason cassia is so popular as a spice is because it works as an aperitif, increasing appetite and decreasing nausea brought on by certain conditions. Preliminary research is even being done on cassia’s potential for lowering blood sugar in type 2 diabetes [4].

Like its cousin cinnamon oil, cassia oil is considered to be a potential dermal irritant and sensitizer due to its methyl eugenol content, and should not be used topically. Aromatherapists recommend diffusing cassia essential oil from a burner or diffuser [5].

Although both spices have their merits, we know culinary enthusiasts will want to know how to distinguish true Ceylon cinnamon from cassia. The one sure way is to look for whole cinnamon sticks: true cinnamon sticks are made up of fragile, papery layers that break off easily and can be quickly powdered in a coffee or spice grinder. In contrast, sticks of cassia bark come in one thick, rigid layer without the “parchment” quality of true cinnamon.