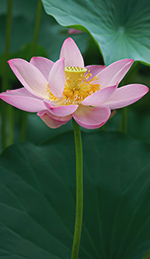 People in the West may be familiar with the lotus as an ornamental aquatic flower, but in Asia the uses of these sacred flowers go far beyond decorating one’s backyard pond. The lotus is revered throughout East and South Asia as a symbol of non-attachment, purity, and spiritual awakening, and lotus absolute oil is commonly used as an anointing oil prior to meditation and spiritual work.

The lotus (Nelumbo nucifera) is an aquatic plant in the family Nelumbonaceae. Commonly mistaken for the related water lily, the lotus can be distinguished by the large yellow seedpod in the center of its blossom, which lilies lack. Known variously as blue lotus, sacred lotus, Indian lotus, and bean of India, lotuses have broad flower petals that can be blue, white or pink, with yellow stamens and seed pods that dry to green or black. Lotuses float atop the water on a pad-like round leaf, anchored to the soil of the lake or river bottom by a long stem. They thrive in ponds and slow-flowing rivers with lots of rich silty soil [1].

Because it floats above the silt and muck of the water—which represents earthly, material life—lotuses have become a potent symbol of non-attachment and spiritual purity in Buddhism and Hinduism: deities and enlightened figures such as the Buddha, Vishnu, Lakshmi, and Ganesha have been depicted sitting on or holding lotus flowers in South and East Asian religious art. Iconography and mantras intended to focus and attune the mind to the sacred often make use of lotus imagery, and its expanding, rising petals are thought to symbolize the promise of spiritual growth[1].

Almost every part of the lotus also serves an earthly use in cuisine and medicine throughout Asia. In Vietnam, lotus roots are commonly cooked or pickled with sugar, chilies and garlic to make a relish, while the seeds are dried and then popped like popcorn[1]. In China and Japan, lotus seeds are soaked in water and then mashed into a paste to flavor sweets such as mooncakes and daifuku (glutinous rice flour buns)[1]. Though rarely eaten, lotus leaves are sometimes also used as a wrap in savory dishes.

In China, Japan, and Korea, lotus flowers and stamens are dried and used like jasmine flowers to flavor green tea, or to make a herbal tisane. Lotus flower tea is used in Chinese medicine as an analgesic[2] and for its sedating[3] and antidepressant properties[4]. The seeds and seedpod have also been used medicinally to treat fevers, encourage the onset of sleep, staunch bleeding, and treat diarrhea, syphilis and hemorrhoids[5].

Lotus absolute oil is a relatively new addition to the aromatherapy world. However, it quickly found a niche as a sumptuous perfume and massage oil that is especially prized for its hypnotic and aphrodisiac effects[6]. Made from the petals using cold CO2 extraction, lotus absolute oil is a red-gold viscous liquid possessing an intense floral scent dappled with green notes. On application, its scent often deepens to a sugary musk that blends exceptionally well with other exotic oils such as sandalwood, magnolia, and cedarwood.

Because lotus oil is highly concentrated, a little goes a long way in any therapeutic application: a few drops of the oil diluted in a carrier oil (jojoba or another scentless oil work best) may be used as a massage oil to treat aches and pains, muscle tension, and as a circulatory stimulant [1]. This last action is often thought to be at the root of lotus oil’s stimulating effect on the libido in both men and women!

Using lotus oil can also be as simple as opening the bottle and inhaling it prior to engaging in meditation or another spiritual practice. Lotus oil can be placed in a diffuser to let its warm, grounding scent permeate and purify a space before spiritual work, or a small quantity of diluted lotus oil may be applied to the forehead to open one’s centers of spiritual awareness.