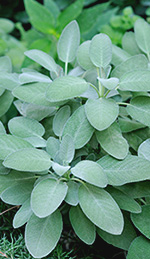 Though most people are more familiar with European sage (Salvia officinalis), anyone who’s ever smelled the incense at a Native American smudging ceremony is already intimately familiar with white sage! Native American tribes in southwestern North America from California to Mexico have used white sage ceremonially, in medicine, and even as a staple food. Today, more and more people in alternative medicine and spiritual communities are realizing the potential of white sage essential oil in spiritual cleansing and increasing awareness of the sacred.

White sage is Salvia apiana, a North American sage species native to the Sierra Nevada region of California, the southwestern U.S., and northwestern Mexico. An evergreen perennial shrub, white sage has fuzzy whitish leaves that exude a strong smell when rubbed. Its small purple or white flowers are mainly pollinated by bees, and the plant’s species name, apiana, comes from this association with bees (or apiae in Latin)[2].

As a desert species, white sage needs well-drained soil and full sun to thrive, and grows mainly in dry pine forests, coastal scrub, and chaparral environments [2]. Because white sage is very drought tolerant, it quickly became a staple food for Native American tribes living in these regions: the seeds were commonly pounded into flour and then mixed with wheat grains to make biscuits and a kind of gruel [3]; the Chumash people of the American southwest eat the leaves and stems of white sage as well [2]. Sage seeds were also a popular flavoring in pinole, a kind of Aztec gruel (also consumed as a beverage) made from ground corn with herbal flavoring additives [2]. Pinole consumption was widespread in much of Mesoamerica before the arrival of the Spanish.

Medicinally, white sage seeds were sometimes used to remove small objects from the eye [3], a practice that paralleled the use of clary sage seeds in medieval Europe. Cahuilla women would also drink a tea made from white sage root to regain their strength and vitality after childbirth [3]. However, by far the greatest use of white sage in herbalism continues to be as a spiritual medicine for cleansing the mind and heart of negative influences: white sage has been used for centuries as a smudge to purify a space before ritual and magical work [3]. This humble plant has been gradually making its way into spiritual practices far outside southwestern Native American traditions, and bundles of white sage leaves are now commonly available in ritual supply and health food stores.

White sage herb and oil can both be burned for their purifying effects. People generally burn the smudging bundles in a metal or shell incense bowl, while the oil may be placed in an oil burner or diffuser. The aura of white sage is cleansing to the psyche, introducing a positive, uplifting mental energy when you feel negativity, apathy, or lack of creative drive holding you back. It is also said to induce feelings of the sacred in everyday life, making white sage oil a valuable tool for setting the mind to spiritual or ritual work.

So, the next time you feel down or under the weather, try inhaling some white sage essential oil—it will put the verve back in your life mentally, physically and spiritually!