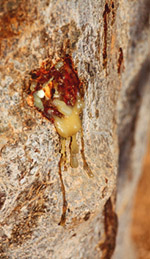 Myrrh has rock-star status around the world thanks to gold and frankincense. Egyptian, Hebrew, Aramaic, Indian, and Chinese texts have written about the magical qualities as well as the value of myrrh for centuries. The Egyptians used it for embalming; the Hebrews used it for incense; it was traded by camel caravans in Arabia, and the Chinese and Indians used it as medicine.

The New Testament as well as neo-pagan significance has kept myrrh in the minds of billions of people; it has never lost its ability to mystify cultures around the world.

Popular pharmaceutical uses for myrrh include toothpaste, mouthwash, and gargles because of its antiseptic qualities, but myrrh oil does much more than that when its energy-moving abilities are recognized.

Myrrh essential oil has a special efficacy when it comes to heart, liver, and spleen functions, and it has the power to purge stagnant blood from the uterus. Over the years, myrrh oil has been used in aromatherapy to alleviate arthritic, rheumatic, and circulatory issues and uterine tumors.

One of myrrh’s latest accomplishments is its ability to lower LDL cholesterol and increase beneficial HDL cholesterol, which opens a plethora of doors in terms of treating internal well-being. Myrrh oil is used in a variety of medical as well as cosmetic products, so the list of internal and external uses for myrrh is a long one, especially when new products are considered.

The Egyptians recently developed an oral drug which contains myrrh that treats parasitic ailments, and in Italy researchers have discovered that myrrh can produce analgesic effects by interacting with opioid receptors.

One of the most important uses for myrrh oil is on older, mature skin. Dehydrated, traumatized, dry, and very distressed skin will react to an aromatherapy oil treatment using myrrh oil. Even chapped heels react to myrrh oil. The oil prevents skin degeneration, and after a few treatments the skin is rejuvenated. Myrrh oil interacts with skin cells to eliminate the free radicals that destroy the cells. Toxins damage skin cells, and the result of that damage manifests as dry, chapped skin in some areas and saggy, wrinkled skin in other areas.

Myrrh oil research continues where the ancients left off, so it is safe to say that myrrh is still worth as much as gold in terms of health and skin care.