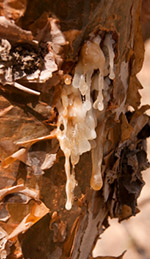 The well-known story of the three Magi bringing gifts to the newborn baby in Bethlehem is a cherished vision, but the value of those gifts is often underrated by those who don’t understand how priceless these essences were to people living in those regions of the world during the first century.

Ancient medical documents dating back to 1500 B.C. list frankincense, as well as myrrh, as remedies for certain illnesses. Frankincense oil held a regal position next to gold in that society (though the oil was not obtained in the same way as we do modern distillation); it was used to treat skin blemishes and wrinkles, as well as viral infections and depression [1].

Frankincense (Boswellia carteri) is closely related to myrrh (Commiphora myrrha); both are species of balsams. There are actually four species of frankincense tree harvested for their resin, all of them balsams that grow in very rocky soil or scree [2]; some frankincense trees have even adapted to grow on bare rock by forming a bulbous growth at the base of their trunks that adheres to the stone by  an unknown mechanism. Resin is traditionally harvested from frankincense trees by stripping — making slashes in the bark — and allowing the resin to be secreted and harden into nodules called tears [2]. The dried resin is harvested from these small knotted balsam trees, and then distilled to produce an essential oil.

Boswellia carteri, also known as olibanum from the Arabic word for the resin, al lubban, originated in the Middle East and Africa and has been known as an incense and medicine in this part of the world for at least 5000 years [2]. It was a component of the holy ketoret incense used by the Hebrews in the Old Testament Bible, where it was sometimes mixed with labdanum and styrax resin before being burned on a charcoal brazier [2].

The use of frankincense is well documented during Biblical times to treat a number of physical as well as spiritual issues. The oil or resin incense is renowned for inducing feelings of the spiritual when its aroma is inhaled, and aromatherapists now recommend frankincense as a calmative for soothing stress, anxious states of mind, and restoring mental equilibrium [1]. Frankincense essential oil can be inhaled from a diffuser or straight from the bottle to combat stress or in anticipation of a stressful episode. Research has been done to suggest that incensole acetate, a compound in frankincense that is released when the resin is burned, produces antidepressant effects on mice by affecting gene activity in the hippocampus [3] — a key brain structure involved in regulating basic drives, including responses to threatening situations [4].

Frankincense oil is also helpful on the physical plane: the oil’s general properties are astringent, antiseptic, anti-inflammatory, carminative, cicatrisant, cytophylactic (encourages the regeneration of cells), digestive tonic, diuretic, emmenagogue, tonic, and vulnerary [1]. The oil is probably best known as an astringent that can firm up the skin when applied in a cream or oil blend, reducing the appearance of wrinkles, fine lines, stretch marks, boils, acne and even scars [1]. Frankincense oil is also a broad-spectrum anti-inflammatory agent that is especially helpful for easing painful menstruation by encouraging blood flow, as well as pain in muscles and joints.

New research is also exploring the ability of frankincense oil to stimulate human growth hormone (HGH) production in the pituitary gland at the base of the brain [6]. The pituitary gland slows down the production of HGH after the age of thirty, so the body begins to show signs of aging.

Facial lines and creases, as well as sags and wrinkles begin to surface as HGH production slows down, but when frankincense oil is used, wrinkles seem to disappear. Compounds known as sesquiterpenes that are found in frankincense oil, as well as myrrh, clary sage, and sandalwood oil, work to fortify the limbic system [6], stimulating the key glands that secrete the hormones responsible not only for regulating the aging process, but for regulating the health of the cells in all organs in the body. Reducing wrinkles is one of frankincense oil’s strong points; all the better if it is a function of restored hormone functions in the body.