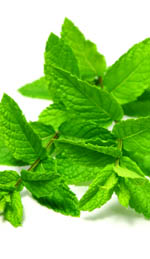 The spearmint plant holds a prominent place in human history. One Greek myth about spearmint may be the origin of the Western name of this plant. Hades, god of the underworld, attempted to seduce Minthe, a nymph. However, his wife, Persephone, did not appreciate his action, and so transformed the nymph into the fragrant spearmint plant. In modern times, spearmint is just one name for this popular flavoring for candy, ice cream, tobacco, and liquor. Some other common names are: Green Mint, Garden Mint, Sage of Bethlehem, Spire Mint, Lamb Mint, Bethlehem Sage, Pea Mint, Mackerel Mint, and Our Lady’s Mint.

Essential oil of spearmint has been used for thousands of years to relieve indigestion, colic, heartburn, irritable bowel syndrome, and flatulence. The pale yellow to green spearmint oil is still used to relieve these issues, and it’s also used to repel insects, boost energy levels, and alleviate fatigue. Spearmint oil is also said to be effective in relieving menstrual strain, cramps, and fatigue.

The fresh minty aroma of this oil helps lift the spirits. The plant is considered gentle enough for aromatherapy use in children, particularly when blended with lime oil. The therapeutic properties of spearmint oil are antispasmodic, carminative, emmenagogue, antiseptic, cephalic, insecticide, stimulant and restorative. This minty oil has been used in bath water for hundreds of years, and has gained a reputation for curing sexually transmitted diseases dating as far back as the 15th and 16th centuries.

Spearmint is considered a great antiseptic because of the myrcene, menthol, and caryophyllene in the oil. Wounds and ulcers heal faster when spearmint oil is used, and infections are eliminated faster when it is coupled with the anti-bacterial and anti-viral properties of lemongrass oil. Spearmint can also help relax contractions and muscle cramps in the abdominal region; the gases that accumulate in the stomach and intestines are passed in the natural downward action that spearmint facilitates. Headaches, stomachaches, chest pain, and insomnia gradually fade when the oil is used in aromatherapy.

Difficulties such as early menopause and irregular periods can be sorted out with the help of spearmint. Spearmint interacts with the adrenal glands and balances the flow of estrogen, which balances the female sexual system and regulates menstruation. Some women believe spearmint oil can delay menopause, plus it provides the relief that women need when it comes to the symptoms associated with menstruation such as fatigue, nausea, and pain in the womb area.

Regaining strength after a long illness and recovering from injuries and wounds are other benefits of spearmint oil, as it has the chemical compounds which assist with recovery. Spearmint oil is an essential oil that we can’t live without.