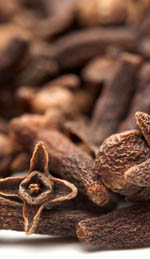 Anyone who has tried Mexican, Indian, or Vietnamese cuisine has tasted dried cloves mixed with cinnamon and cumin but may not have recognized the flavor. Cloves have been used for centuries to accentuate the taste of foods all over the world. The locals in Indonesia use cloves to make cigarettes called kreteks, which are smoked throughout Europe, Asia, and the US, and cloves are an important incense ingredient in China and Japan as well as in Jewish ceremonies.

Clove bud oil has been used for thousands of years in Ayurvedic medicine as well as in Chinese medicine. The oil helps relieve stomach, kidney, and spleen issues. The Western world adopted the use of clove bud oil in dentistry as well as in aromatherapy due to its natural antihelmintic ability, and its ability to warm the digestive tract. The oil is also used as a topical remedy for hypotonic muscles, and it helps with symptoms of multiple sclerosis. West Africans and Tibetans use clove bud oil to calm upset stomachs, vomiting, and diarrhea.

There are few physical disturbances that have not been treated at one time or another with cloves and the essential oil extracted from them. Clove bud oil blends well with other essential oils like cinnamon bark, peppermint, rosemary, citronella, grapefruit, lemon, orange, and nutmeg.

Eugenol is the main constituent in clove oil. Over seventy percent of the essential oil extracted from cloves contains eugenol, which is well known for its anesthetic, anti-inflammatory, and antiseptic properties. The clove oil has an impact on contaminants like tetrachloromethane, and cancer related to the digestive tract. Joint inflammation is another ailment that’s relieved when clove bud oil is used in massage therapy.

New studies show that clove bud oil has the potential to prevent cancerous growth since it contains an abundance of flavonoids as well as calcium, magnesium, vitamin C, and omega-3 fatty acids as well as other phytonutrients.

Other studies show that when clove bud oil is combined with cod liver oil it makes a huge difference in inflammatory disease treatment. Clove oil is a proven pain reliever when blended with marjoram oil. It is an excellent topical agent, especially when it is combined with coconut and almond oil. The antispasmodic properties of the oil also alleviate muscle aches and pains when combined with other ingredients.

The positive aromatherapy results of using clove bud oil are highly valued due to its ability to remove harmful toxins from the body, and to stimulate the excretory system.