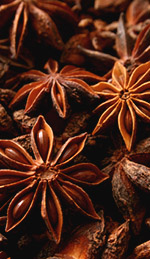 Named for its distinctive star-shaped seed pod, star anise has been used as a cooking spice and medicine in East and Southeast Asia for hundreds of years, especially in the treatment of digestive disorders such as upset stomach and wind [1]. Star anise essential oil is clear to pale yellow with a strong licorice-like odor reminiscent of anise seed oil, although the two species are not closely related. Its familiar aroma comes from the presence of anethole, a compound with beneficial regulating properties for the digestive system [2].

The star anise (Illicium verum) is a small evergreen tree native to Southwest China and Northeast Vietnam. The genus name Illicium comes from the Latin verb illicio, meaning to entice, because star anise’s sweet-spicy flavor was believed to attract anyone who smelled it. Not surprisingly, star anise seed pods are popular in East, South and Southeast Asian cooking, especially in Vietnam, Malaysia, and Indonesia. Star anise seed pods add dimension to Chinese Five Spice, Indian garam masala and biryani rice, and Vietnamese phò noodle soup. In the West, star anise seeds are often used as a more economical alternative to anise seed for flavoring baked goods and liqueurs such as Anisette.

In traditional Chinese medicine, star anise is considered a warming and moving herb that is stimulating to the stomach, spleen, gall bladder and liver [3]. Star anise essential oil and star anise tea were used to treat ailments resulting from blockages in these systems. Star anise seeds were chewed after meals in China and Japan to sweeten the breath and aid digestion, and the tea made from the seeds was sometimes employed against rheumatism. Today, aromatherapists use star anise essential oil in massages to treat indigestion, colic and gas, rheumatism, and menstrual cramps []. Star anise oil may also be diffused and inhaled to treat congestion, persistent coughs, colds and chills, to relieve mental fatigue, and to balance the emotions [4].

Interestingly, traditional and modern medicine also cross paths in the star anise tree: star anise seed pods are the main commercial source of shikimic acid, a precursor of the drug oseltamivir (Tamiflu), which is used to treat influenza [5]. Shikimic acid is extracted from star anise seeds in a 10-stage process that takes a year to complete!

While star anise seeds are safe for human consumption, the seeds of a related species, Illicium anisatum, are toxic: native to Japan, this species contains the neurotoxic compounds anisatin, neoanisatin, and pseudoanisatin, which can also cause inflammation of the kidneys and digestive tract if the seeds are consumed [3]. Illicium anisatum seeds were once burned as a ceremonial incense in Japan, but today it is recommended to avoid using this species in any application. Always buy your star anise essential oil from a reputable vendor that lists the genus and species (Illicium verum) on the label to make sure you are getting a true, verified star anise essential oil.