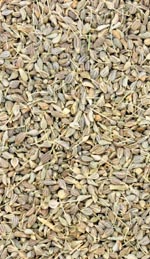 The anise seed has been an important part of the Mediterranean diet for centuries. The Egyptians and the Greeks used anise as a spice and as a medicine long before the Spanish, and the Chinese were aware of the antiseptic, antispasmodic, digestive, diuretic, and stimulating qualities of anise oil longer than any culture that we know of (although Chinese anise oil comes from a different species of plant).

Most of the European information about the essential oil of anise comes from Turkey, Greece, and Italy. Pliny, the Roman author and naturalist, wrote about the stimulating properties of anise seeds in the first century. An early-morning brew was made for anise seeds and it was used as an eye-opener and pick-me-up. The concoction was a hit in early Roman society.

For centuries anise has been blended with lavender, ginger, pepper, orange, pine, and rose, and a variety of drinks and medicines have been used over the years to cure coughs, cramps, nausea, insect bites, headaches, and indigestion.

Star anise oil from China is a completely different product from Anise seed oil. Star anise oil crystallizes at cool temperatures thanks to the anethole content in the oil. Star anise oil is harvested from the fruit of the Illicium verum plant that grows in Southeastern Asia. This essential oil is also used to treat coughs, and it is a popular perfume agent.

Anise seed oil is affectionately called the fisherman’s friend because early cultures believed it had the ability to remove human scent. That quality has been a topic of conversation for centuries. Old fishermen covered their bodies in this essential oil to catch more fish. This practice is still an important part of fishing in some parts of the world.

The most effective use of anise seed oil is to relieve stomach cramps, gas, and other digestive issues, as it is a powerful digestive. This essential oil also has very strong estrogen-mimicking properties, so it is used to increase milk production in nursing mothers. Anise seed essential oil is important in aromatherapy treatments for bronchitis and asthma, plus it’s a stomach soother and digestion stimulator. These qualities keep anise oil popular in this modern pharmaceutical-driven society.

The antispasmodic properties as well as the sweet licorice aroma of this ancient remedy make it one of the most well-known essential oils in the world. Fennel oil resembles anise oil in aroma and uses, but anise seed oil is usually the first essential oil that comes to mind when one has a stomach ache (or when one is looking to hide from fish).