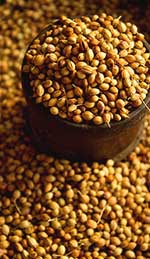 Coriander appears in so many different cuisines that it can be hard to determine where the plant first originated. We know by its Latin name, Coriandrum sativum, that coriander has been cultivated by humans for a long time (sativum means “cultivated” in Latin). The seeds have been found in ancient Greek and Egyptian ruins that are thousands of years old. Coriander seed essential oil  is commonly used today as a appetite stimulant, energizer, and detoxifying oil for the whole body.

An annual herb in the carrot family Apiaceae, coriander is a soft plant with feathery roundish leaves and small pale pink or white flowers that bloom in clusters called umbels. Coriander is native to Southern Europe, North Africa and Southwest Asia. As a testament to its status as an ancient food, preserved coriander seeds have been recovered from the Stone Age level of the Nahal Hemel cave system in Israel; today, coriander seeds, leaves, and even roots are widely used in cooking, especially in Indian, Southeast Asian, and Mexican dishes. In fact, the common English word for coriander leaves, cilantro, is taken from the Spanish word for the plant.

The word coriander most likely comes from the ancient Greek koriadnon. It may be related to the Greek word koris, meaning “stinkbug”, since the Greeks believed that the smell of crushed coriander seeds had a similar pungent aroma! Interestingly, modern studies have suggested that genetic factors are at the root of some people’s dislike for the smell and flavor of coriander when used as a garnish or cooking spice: a minority of people are sensitive to unsaturated aldehydes in coriander, which causes them to perceive an offputting “soapy” smell or taste in coriander leaves and seeds.

However, history attests that most people love the smell and taste of coriander: the ground seeds are used as a spice in classic Indian and Southeast Asian curries, and even added to Belgian beer during fermentation to impart a hint of citrus to the completed brew. The seeds are also used to flavor Chartreuse liqueur, and may be added to rye bread as a substitute for caraway seeds when those aren’t available.

There’s another very good reason why coriander is so popular in cuisines worldwide: coriander seed has beneficial regulatory effects on digestion, and can relieve wind and indigestion [1]. Coriander seed essential oil may be used in massages to address digestive complaints, ease muscle and joint pain [2], and act as a general detoxifier for the body [3]. A warming, uplifting oil, coriander essential oil is also inhaled to stimulate the senses and clear away mental fog; its energizing aroma can banish weakness and fatigue, and may be helpful in treating tension headaches [4]. Blend it with woody or spicy oils such as cypress, cinnamon, ginger, pine, and sandalwood for a truly memorable fragrance that leaves you feeling clearheaded and ready to tackle your day.