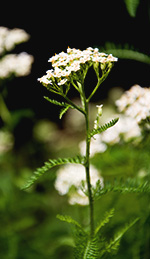 It may look like an inconspicuous green shrub in your garden, but yarrow (Achillea millifolium) has actually been used in medicine, cooking, and even divination for millennia in temperate regions of Europe, Asia and North America. Yarrow essential oil can range from pale green to a striking dark blue, and is most commonly used in aromatherapy today for the treatment of minor wounds, pain and inflammation [1], and as a mild stimulant [2].

Yarrow is a flowering plant in the Asteraceae family, which is also home to well-known medicinal herbs such as chamomile and echinacea. The yarrow plant has many-branched, almost feathery green leaves and sprouts umbrella-like flowers that vary in color from white to pale pink. Yarrow grows wild in grasslands and open forests, and is also sold as an ornamental cultivar by many plant nurseries.

Yarrow’s long history of use is reflected in its wide array of common names, which include millefoil, thousand-leaf, thousand-seal, and soldier’s woundwort—a reference to yarrow’s use in wound poultices on the battlefields of medieval Europe [2]. Knowledge of yarrow’s wound-healing properties was passed down from Classical Rome and Greece. In the Iliad, yarrow is given to Achilles by Chiron, the centaur who trains him in the arts of war [4]. He teaches Achilles how to use yarrow as a wound salve for the soldiers under Achilles’ command.

Like many European herbs that are little known today, yarrow was once a popular cooking and flavoring herb that was added to everything from salads to savory dishes to beer: before hops rose to prominence, a yarrow-containing herbal mixture called gruit was a very popular agent for flavoring beer [2]. Today, you can still buy liqueurs and bitters that have been flavored with yarrow.

Thousands of miles away in China, dried yarrow stalks were used to interpret readings from the I Ching, or “Book of Changes” as part of Chinese divination practice. Along with tortoiseshell, yarrow is considered a lucky herb that “makes the eyes bright” and promotes intelligence according to traditional Chinese medicine [2].

In North America, indigenous peoples have also long used yarrow as a medicinal herb for relieving the pain of headaches and earaches, as well as treating head colds and fevers [5]. The Zuni people of the American Southwest even make a juice from yarrow leaves and flowers and apply it to the skin as an anti-inflammatory [5] before participating in fire-walking or fire-eating ceremonies!

The mildly aromatic yarrow essential oil is still used in aromatherapy to treat minor cuts and abrasions, since compounds in the leaves are known to promote blood clotting [4]. With its general anti-inflammatory properties, yarrow oil is excellent for relieving the pain of injuries, headaches or muscle aches [3], and for reducing the congestion associated with cold and flu [1]. Yarrow essential oil is also astringent, hypotensive, mild stimulant, and diaphoretic, used to reduce fevers by inducing sweating [5]. The whole herb is sometimes taken as a bitter tonic to aid digestion and stimulate the production of gastric juices [1]. A massage with diluted yarrow oil may also ease painful menstruation through its analgesic and anti-inflammatory effects [4].