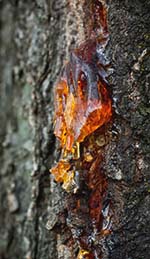 In recent years many essential oil suppliers have been offering a product called amber oil or amber essence. Amber oil is described as having a unique sweet-woody fragrance that can enhance a broad range of essential oil blends. In actuality, the many products out there called amber oil are a clever bit of marketing: unlike true essential oils that are steam distilled or otherwise extracted from a single plant, amber oil is a blend of several essential oils—often vanilla, labdanum, patchouli, benzoin, and other earthy, sweet oils—meant to simulate the scent of amber [1].

So what is true amber and why can’t it be made into an essential oil?

There is no one tree species responsible for producing amber: indeed, different regions of the world have different types of amber depending on the tree species that once lived there. Famous kinds of amber valued in jewelry making are Mexican amber—the transparent golden variety most people think of when they think of amber—and Baltic amber, an opaque, pale yellow variety. Yet amber comes in many more colors than these, including reddish brown, white, black, orange, red, green, and even blue.

Amber appears throughout history primarily as decoration: with its myriad of colors, durability, and smooth pleasing texture, amber was sought after by the Romans, who carved it into jewelry, dice, and amulets. Emperor Nero even sent an expedition to Scandinavia to obtain this northern “gold”, thus establishing a trade route into northern Europe. Centuries later, Russian Tsar Peter the Great was given 6 tons of amber carved into ornate wall panels, a gift from Prussia (now Germany). In 1755, Tsarina Elizabeth had them installed, backed by gold leaf and mirrors, into a room of the royal palace that became known as the Amber Room. This 8th wonder of the world was destroyed during World War II but later reconstructed by the Smithsonian in 2003 [2], and you can go see this reconstruction today.

Amber also has a more malleable intermediate form called copal, a semi-fossilized resin that hasn’t had time to harden into amber [3]. It can be distinguished from amber by its lighter color—often white or citrine—and because it readily dissolves when a drop of acetone or chloroform is applied. Mesoamerican peoples such as the Maya and the Mexica (Aztec) burned copal as a resin incense, a practice that is still carried on by indigenous groups today. A form of East African copal from the amber tree (Hymenaea verrucosa)[4] also came into demand in Europe and America during the 1800s as a wood varnish for carriages, train cars, and paintings [3].

As you can see, amber has a variety of uses, from the ornamental to the practical. However, it is rarely used in perfumery because the fossilized resin’s woody scent is quite faint. It is best appreciated when worn as jewelry close to the face of the wearer, and would be quickly overwhelmed by being blended with stronger essential oils. However, if you still want to experience a scent that comes close to true amber, you can always blend together warm, woody, and earthy scents such as labdanum, patchouli, vanilla, benzoin, and more to recreate the calming, grounding aroma of this prehistoric essence.