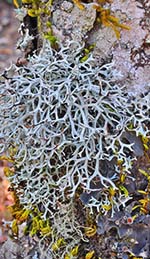 Oakmoss essential oil is one of those perfume ingredients you see listed in so many articles on aromatherapy as well as ingredient lists; yet it is not often that readers get a clear definition of what oakmoss is. As the name suggests, oakmoss is commonly found on or near the trunks of mature oaks; however, it is not a moss but actually a lichen that grows on both deciduous and coniferous trees. Oakmoss essential oil has been distilled for use in perfumery since at least the 16th century, and its woody, almost animalic scent is still much valued as a base note in commercial fragrances [1].

The specific kind of lichen that yields genuine oakmoss essential oil is Evernia prunastri, a species native to the mountainous forests of the Northern Hemisphere, especially central and western Europe [2]. Growing on the trunks or branches of mature oaks and other trees, oakmoss lichen has strap-like branches called thalli that resemble deer antlers in shape. Oakmoss thalli are greenish gray and tough when dry, and turn a rubbery olive green when wet. Oakmoss essential oil is used extensively in perfumery today for its complex scent, which has been described as woody, sweet, and sharp. The aroma of oakmoss oil varies depending on whether it is distilled as an essential oil or a more concentrated absolute oil; the essential oil is generally considered to have a lighter scent, while the richer absolute oil possesses a muskier scent with an almost leathery undertone [3]. Oakmoss oil’s complex array of odors can even be affected by what type of tree the lichen is growing on: some oakmosses that grow on coniferous trees are specially sought for their turpentine-like base tones, which add a refreshing sharpness to specific perfumery blends.

Though not as historically famous an essence as labdanum, frankincense, or myrrh, archaeological evidence suggests that oakmoss oil was known in the ancient Mediterranean world: baskets full of dried oakmoss lichen have been discovered in Egyptian tombs, though it is unclear whether the lichen was being stored to make fragrances or as food [1]. A competing theory suggests that oakmoss, which contains a starchy edible substance inside its thalli, was being stored as a potential emergency food supply.

In North America, Native Americans called oakmoss lung wort or lung moss. Various tribes frequently dried the lichen and used it as a folk treatment for respiratory ailments such as respiratory congestion, irritation, chest cough, and even bronchitis [4]. The dried lichen was also used as a poultice to speed wound healing [4]. Though neither of these medicinal uses have yet been investigated for their effectiveness in a clinical setting, oakmoss’s traditional association with respiratory health does suggest some fascinating avenues for future research!

For the time being, it seems that oakmoss will continue to be sought after as a fixative, fragrance, and exotic perfume ingredient, especially in Oriental and “chypre”-type blends [3]. The traditional base note of fougère perfume, oakmoss essential oil is also commonly used as a fixative in blends and soaps, since its rich scent helps anchor more fleeting notes, especially citruses. In recent years, international regulations have limited the allowed amount of oakmoss oil in perfume blends to 0.1% after evidence came to light that it can be a dermal irritant in larger quantities [3].

So, when making your own blends it is also best to blend a minute quantity of oakmoss essential or absolute oil with other essential oils in a neutral base such as almond, jojoba or olive oil. Adding oakmoss oil to your blend will also allow you to take advantage of the oil’s prized fixative qualities! As mentioned above, oakmoss oil is stellar at anchoring more delicate scents in a fragrance blend and helping them last even longer. Ideal for bringing out tender floral and citrus notes such as lavender, neroli, and bergamot, oakmoss essential oil provides a comforting base note that can add dimension and intrigue to any fragrance.