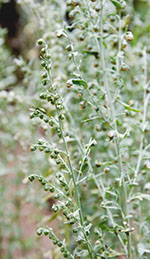 Few historical “vices” have persisted in contemporary legend as has absinthe, the alcoholic drink made from the leaves of the wormwood plant. However, those of you excited to try absinthe, now that it has once again been made legal in the U.S., may be disappointed to learn that the legends of the green “muse” of Parisian artists and writers may be more interesting than the facts; most likely, the effects attributed to the wormwood in 19th-century absinthe were actually a result of good old alcohol intoxication. However, that doesn’t mean wormwood is without its uses: the herbage of wormwood has demonstrated benefits as a gastric stimulant, stomachic, tonic for indigestion, and remedy for intestinal parasites [1]. Wormwood essential oil may also be used in minute quantities as a perfumery agent to give fragrances a unique licoricey undertone.

There are several plants in the genus Artemisia of which wormwood is a member, including Artemisia abrotanum (southernwood), A. dracunculus (tarragon), A. vulgaris (mugwort), and A. annua (sweet annie) [2]. It’s very important when purchasing essential oils to pay attention to the genus-species of the plant, because all these Artemisia species have very different chemical profiles and uses in aromatherapy and herbal medicine. Wormwood is Artemisia absinthium, a perennial herbaceous plant with silvery green feathery leaves. It is native to temperate Eurasia and North Africa [1].

In Europe and Asia, the bitter leaves of wormwood were commonly brewed into a tea and taken to treat intestinal parasites, relieve indigestion, and stimulate gastric juices [1, 3]. In fact, the name wormwood–from the Middle English “wormwode”–is a direct reference to the use of wormwood to kill intestinal parasites (worms) [1]. The leaves were sometimes added to beer as a flavoring agent, along with mugwort and English ivy, before Bavarian purity laws restricted beer ingredients to hops, barley, sugar and water. The practice of adding wormwood to beer may have been the original inspiration for absinthe, an alcoholic drink flavored with wormwood and other herbal additives that skyrocketed in popularity among the artistic set of Continental Europe in the mid-1800s [5]. 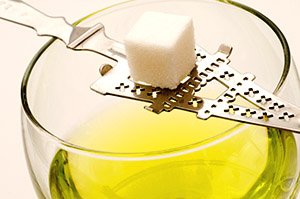 A classic glass of absinthe, with slotted spoon and sugar cube. Traditionally, water is drizzled through the sugar cube to sweeten the drink.

During its heyday, absinthe was considered the drink of choice for artists, writers and other bohemian creative types in Europe, especially Paris, and its inspirational properties were praised by the likes of Vincent Van Gogh, Oscar Wilde, and Edgar Allen Poe [5]. However, absinthe experienced a dramatic reversal in the early 1900s when it was implicated in a disorder called absinthism, which led to the drink being banned for the next seventy years. Physicians of the time described absinthism as a condition characterized by seizures, debility, mental illness, hallucinations, and violent behavior, and they blamed the wormwood in absinthe as the cause [5].

Wormwood was probably implicated in absinthism because it contains thujone, a compound which can be neurotoxic in large doses [5]. However, the levels of thujone in absinthe are not enough to cause harm [4]. Most researchers today believe that what 19th-century doctors called absinthism was likely a result of alcohol abuse, a condition poorly understood at that time [5]. Another explanation is that some inferior brands of absinthe were dyed bright green using toxic compounds such as copper sulfate or antimony chloride, which caused brain damage in those unfortunate enough to consume these inferior brands [5]. When buying absinthe even today, it’s important to only buy brands that have not been artificially dyed green, blue or another color. High-quality absinthe is naturally green due to the presence of chlorophyll [5].

Wormwood essential oil is not absinthe and should never be taken internally, as it is an oral toxin that can induce kidney failure and seizures due to its high thujone content [1]. For this reason, wormwood oil is not used in aromatherapy. It may be used in minute quantities as part of an exotic perfume blend along with other licorice-like or floral essential oils such as anise, lavender, oakmoss and neroli.

Interestingly, a recent double-blind placebo-controlled study examined the potential of a herbal wormwood preparation made from the fresh leaves to relieve the symptoms of Crohn’s Disease [4]. Both groups of subjects had their Crohn’s Disease under control through standard steroid therapy before the study. During the trial, the steroid therapies were reduced and the experimental group was given a preparation of wormwood while the control group received no additional treatment. The control group experienced the expected worsening of symptoms, while the wormwood-treated group actually had an improvement in their symptoms, apparently due to the wormwood [4]. Though the researchers cautioned that more studies are needed, we thought this little tidbit about wormwood’s potential for treating Crohn’s Disease was worth sharing with all of you!