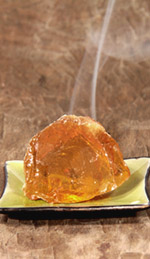 The little-known elemi essential oil is sometimes called “poor man’s frankincense” because of its similar aroma and list of uses in aromatherapy. But don’t let the name fool you: elemi oil may be more economical to produce because it comes from a fast-growing tropical tree, but it is in no way an inferior product. Elemi essential oil can be used in many of the same applications as frankincense oil. In fact, researchers now know that elemi (Canarium luzonicum) is related to both frankincense and myrrh, and the oil has similar antiseptic, skin tonic and anti-inflammatory actions [1].

Elemi trees can grow up to 98 feet (30 meters) tall in their native Philippines, where the tree’s pale yellow resin is harvested to make a gum which is then distilled to produce elemi essential oil. Called pili in Tagalog, the elemi tree gets its English name from the Arabic word elemi, which means, roughly, “above and below”: a reference to the belief that elemi oil supports both physical and spiritual health [2]. Elemi trees begin to produce resin after losing their leaves during the dry season, and the gum is then harvested in two commercial grades: primera, which has been cleaned of foliage and other residue before export from Manila; and secunda, a crude form of the gum which may contain leaf or twig residue.

Archaeological records show that elemi was traded widely in the Mediterranean Middle East and made it as far west as Egypt, where the ancient Egyptians used the oil in embalming mixtures as a fixative. Elemi oil was also used in Europe as a skin tonic for reducing the appearance of fine lines and wrinkles. However, there was a lot of confusion in Europe about where exactly elemi oil came from: in the 17th and 18th centuries, the term elemi was freely applied to a number of resinous tree species, including the Icica genus native to Brazil and other members of the Boswellia genus, which includes the frankincense tree [2]. These different species were grouped together because they all produce resinous gums that can be used in skin treatments and to treat infections, so people confused them with elemi oil. The root word of elemi is now thought to be enhaemon, the name of an unidentified medicine written about by Pliny that was supposedly derived from the resin of a kind of Arabian olive tree.

Now of course, we know that true elemi essential oil comes from the Philippines. Besides its uses in aromatherapy, elemi oil is an ingredient in varnish, hand soaps, and incense blends. Therapeutically, elemi essential oil may be inhaled from a diffuser as an expectorant to treat congestion and sinusitis [3]. Like its cousin frankincense, elemi oil can be a remarkable skin tonic when used in massages, reducing the appearance of scars, bringing relief to irritated, infected, or inflamed skin, and revitalizing mature skin [3]. Its anti-inflammatory actions can be beneficial for treating nerve pain, sore joints, and muscle soreness [4]. Elemi essential oil’s warm aroma is emotionally uplifting and stimulating, good for relieving feelings of stress, mental exhaustion and tiredness [4].

3. “What Is Elemi?” WiseGEEK: Clear Answers for Common Questions. Accessed May 20th, 2014. http://www.wisegeek.com/what-is-elemi.htm.