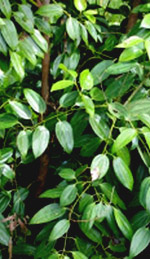 Who doesn’t love the spicy, warm fragrance of cinnamon? Whether used in cuisine or aromatherapy, cinnamon’s sweet, pungent, slightly spicy aroma is recognized worldwide. A little-known fact about cinnamon is that two varieties of the oil are used in aromatherapy: we’ve already covered the medicinal uses of cinnamon bark oil, and it is to the gentler but equally effective cinnamon leaf essential oil that we now turn.

Distilled from the leaf of the cinnamon tree (Cinnamomum verum syn. zeylanicum) [1] rather than the bark, cinnamon leaf oil is lighter in color, has a softer scent more reminiscent of cloves, and is less sweet-smelling than the bark oil. Cinnamon leaf essential oil is also more versatile in aromatherapy since it contains smaller amounts of potentially sensitizing compounds such as cinnamaldehyde.

Though the cinnamon tree is native to Indonesia, it is also cultivated in India, Sri Lanka and elsewhere for its bark and leaf. One of the oldest spice commodities, cinnamon was an important trade good between China, India, and the Mediterranean world; it was used as a temple incense in Greece, and the Egyptians used cinnamon oil in foot massages, to ease childbirth, and to stem excess bile that led to indigestion [1]. In the Middle Ages, ground cinnamon was added to mulled wines and was an important aphrodisiac in love potions, probably because of its warming effect. The word cinnamon likely comes from the Greek kinnamon, meaning tube or pipe, a reference to the tube-like appearance of cinnamon sticks [1].

In aromatherapy, cinnamon leaf is considered a tonic for the respiratory, endocrine, and nervous systems, and recent research has found that cinnamon leaf and bark oils have antimicrobial [2] and anti-inflammatory [3] actions. Research is also being done on the potential for supplements of ground cinnamon to regulate blood sugar in diabetics [4].

Though mainly used in diffusion, cinnamon leaf oil is sometimes added to hot baths or compresses in minute quantities. Cinnamon leaf oil may be diffused and inhaled to treat respiratory infections, colds, sneezing, and to alleviate feelings of weakness or low energy [5]. In a warm bath or oil blend, cinnamon leaf essential oil is often used to calm digestive spasms and imbalances in secretions that can cause nausea, diarrhea or indigestion [6]. Cinnamon leaf oil is also used to reduce pain in sore muscles and arthritic joints, to relieve chills, and to treat delayed or painful menstrual flow [5]. Though generally gentler than the bark oil, cinnamon leaf oil may still irritate sensitive skin and should be used very sparingly in any oil blend.

5. Lawless, Julia. June 2013. The Encyclopedia of Essential Oils: the Complete Guide to the Use of Aromatic Oils in Aromatherapy, Herbalism, Health and Well-Being. Conari Press.