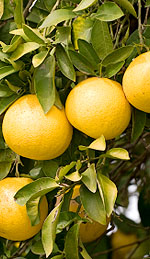 Grapefruit is a youngster in the fruit world. There’s no mention of grapefruit in Roman or Greek texts, and the Chinese make no reference to the fruit either. It’s still a mystery how, when, and why a sweet orange tree and a pomelo tree were married to produce the grapefruit tree, but records indicated that the plant originated in Jamaica sometime after Columbus arrived in 1492. There are others who believe that grapefruit came from the islands of Southeast Asia where the pomelo tree is an indigenous species.

The origin of this amazing fruit is not as important as the benefits it provides to humans. The grapefruit is a refreshing and satisfying breakfast fruit as well as an enjoyable snack, which can be eaten at any time without counting calories. The oil from grapefruit has earned a reputation as an appetite suppressant when it’s mixed with a little water and put on the tongue or inhaled. Grapefruit oil is a fat dissolver that reduces cellulite that can settle in the thighs, buttocks, stomach, and arms.

Essential oils also help the digestive process, and grapefruit oil assists the kidneys and the liver so that they function normally. It can even be used in drug withdrawal programs, and it plays a role in keeping the lymphatic and vascular systems healthy. The fragrance of the oil elevates the senses, so it is also used as an antidepressant. Travelers use it for jet lag, and migraine headache sufferers get relief when they use it in aromatherapy.

The therapeutic qualities of grapefruit oil come from the d-limonene, which is not found in any other citrus fruit. There’s also a sulfur compound called 1-p-menthen-8-thiol in the oil that gives it that distinct aroma and flavor. This compound only comprises one part per billion in the oil, but the body and senses detect it and make use of it therapeutically.

Grapefruit and essential grapefruit oil have been touted in weight-loss marketing campaigns for the last forty years, so the fact that the oil is a powerful cellulite crusher is no surprise to people who are plagued with weight issues due to genetics or overeating. Toxin build-up and fluid retention create cellulite in fat cells. When toxins are not flushed from the body they accumulate in cells. Grapefruit oil reduces fluid retention and helps the body flush out the free radicals that create cellulite.

When grapefruit is used as an aromatherapy oil it impacts the lymphatic system, and its diuretic properties remove excess fluid. The body’s immune system responds, and the digestive system turns food into energy, which is burned as calories rather than being stored as fat.