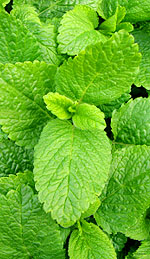 The 15th-century alchemist and physician Paracelsus called melissa “The Elixir of Life”, and it was commonly used by both the Greeks and the Romans. The Arabs used it as a special remedy because it had the ability to revive the spirit as well as the body. The ancients were well aware that wellness is rooted in both the mind and the body, something modern-day pharmaceutical remedies often overlook.

The Greeks named the melissa plant after the honey bee, since most of the plants back in those days had a beehive nearby. The Europeans used it as an insect repellent and for insect bites, and the French loved using it in soaps and perfumes. In modern times, Melissa oil has gained a noble reputation in aromatherapy, and it has been the subject of several studies on insomnia and anxiety. Studies on lemon balm extract are confirming the fact that it can relieve both troubling experiences, and produce greater feelings of alertness and calm – in other words, it revives the spirit.

Melissa oil mixes well with lavender, orange, lemon, and geranium oil, and it has demonstrated the ability to reduce the effects of Herpes Simplex outbreaks when it is blended with these oils, a few drops of tea tree oil, and almond oil. A doctor at the Technical University of Munich reported that only one drop of melissa oil on a lesion promotes remission. A drop a few times a day on the area will speed healing and prevent further outbreaks as well, especially in combination with ravensara oil.

And the redeeming qualities of the chemical constituents of melissa oil don’t stop there. The oil is used in aromatherapy to treat anorexia, car sickness, and to balance female hormones. The oil is also used for all sorts of allergies as well as digestive, respiratory and nervous system troubles. It has been known to calm down heart palpitations, and it has an antispasmodic effect on the cardiac system. The complexity and power as well as gentleness of this ancient oil demonstrate how the medicines of nature can be much more effective than synthesized medications, thanks to the fact that the vibrancy of the plant remains present.

People that use melissa oil say that it assists them in experiencing a part of the self that has great sense and sensitivity. The essential oil clears negative thoughts and eases the sorrows that can disrupt normal heart functions. The imagination is stimulated, and there’s an uplifting rather than melancholy remembrance of past experiences, which fuels positive energy into cells and organs, allowing the body to respond positively and to heal itself.