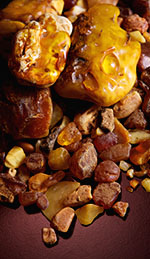 Among the many essential oils derived from tree resins, there is a little-known product known variously as benzoin essential oil, styrax oil, or storax oil. You may have heard these terms in different places, but they all refer to the same botanical product. Benzoin essential oil is steam distilled from a resinous exudation produced by trees in the Styrax genus, and is used to make incense, food flavorings, and perfume fixatives.

The genus Styrax contains several species of trees, both deciduous and evergreen, that are native to warm and tropical regions of the Northern Hemisphere; most Styrax species are found in Southeast Asia, but some occur in South America as well [1]. With so many different species of Styrax trees out there, it’s more important than ever to know which varieties produce a useful essential oil, so you can arm yourself with that knowledge when it comes time to make a purchase. The two species in the Styrax genus from which an essential oil is produced commercially are Styrax tonkinensis (found in peninsular Southeast Asia–Laos, Cambodia, Thailand and Vietnam) and Styrax benzoin (from Sumatra) [1]. This article will use the term “benzoin” interchangeably to refer to both varieties.

The resin of S. tonkinensis—also called “Siam” benzoin—is reddish yellow on the outside with a milky white interior; it contains up to 40% benzoic acid, along with benzoresinol, siaresinotannol, and vanillin, giving it a lighter, more vanilla-like scent. It is much more frequently used in perfumery and food flavoring than the “Sumatra” variety S. benzoin, which produces a reddish gray resin with a sharper, more balsamic scent due to a higher content of cinnamic acid [2]. However, both forms of benzoin essential oil have valuable fixative properties in perfumery, as well as expectorant, emollient, and calming properties when used in aromatherapy [2].

The Arabic name for benzoin is luban jawi, or literally, “frankincense from Java”; this ancient name points to the role of benzoin resin and oil in the ancient world as an incense ingredient and medicine that was equated with frankincense oil. Official records of the international trade in benzoin date from the Middle Ages, but the linguistic and archaeological evidence suggests benzoin was important in the Western world far earlier than that. The Phoenicians were importing the resin of a Styrax (probably Styrax officinalis) into Greece from the Ancient Near East before the common era, and benzoin resin has been one candidate proposed for nataf, a component of the sacred Hebrew incense recorded in the Old Testament [3]. Later on, the Orthodox Christian Church burned benzoin resin as incense along with other rich middle notes such as opoponax and labdanum; various Styraxes also show up in Heberew rituals and in the Muslim world. One interesting use of benzoin was actually as a “snake repellent”: farmers in the Middle East burned bowls of benzoin during the frankincense harvest to drive away snakes that were believed to guard the trees [3]!

Medicinal uses for benzoin included as a skin antiseptic and mild emollient for irritated skin, an expectorant agent, and an analgesic for sore joints [2]. Though usually benzoin resin was dissolved into a tincture to treat these conditions, the essential oil could also be inhaled, especially to treat bronchitis and other lower respiratory infections. The Muslim physician Avicenna (Ibn Sina) even recommended a combination of benzoin resin with other antiseptic oils as a dental amalgam to replace lost or damaged teeth [3]!

Today, aromatherapists will sometimes use benzoin essential oil in dilution to treat sore joints, chapped or dry skin, coughs, bronchitis, and stress-related conditions [4]. Benzoin has a rich grounding scent that is calming to the psyche, making it useful for alleviating anxious states of mind induced by stress; it is traditionally associated with opening the root chakra in Buddhist meditation practices [5].

Benzoin oil should always be diffused or used in dilution for topical applications, to avoid possible skin sensitization. Blending best with resinous, woody and citrus oils, benzoin oil yields an intriguing aroma that may be suitable for meditation when mixed with frankincense, myrrh, cedarwood, sandalwood, patchouli, and vetiver [5]. For a brighter, more uplifting scent with pleasant “orange” notes, combine benzoin oil with citruses such as bergamot, mandarin, tangerine, or sweet orange oil!

4. Lawless, Julia. 2013. The Encyclopedia of Essential Oils: The Complete Guide to the Use of Aromatic Oils in Aromatherapy, Herbalism, Health, and Well-Being. Conari Press.