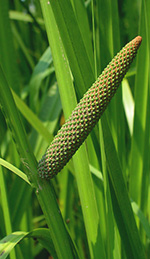 The plant Acorus calamus has been known by many complimentary names throughout history, including “sweet flag”, “sweet cane”, “sweet grass”, “sweet cinnamon”, and “myrtle grass”. As the name suggests, calamus root has been a valued ingredient in perfumery and cooking for centuries—especially in medieval Europe and Asia, where it was often used a substitute for cinnamon, ginger, and nutmeg due to the sweet, cinnamon-like scent of its roots [1]. Calamus essential oil has likely been used even longer as a perfume ingredient, and it’s still prescribed in American herbalism for stomach conditions such as gastritis, to calm nerves, and to relieve fatigue [1].

Acorus calamus is a perennial marsh plant with upright, flat green leaves. It grows in wetland areas and the margins of lakes, ponds and rivers, though it can tolerate drier soil if the shoreline recedes. Calamus also has a yellow cone-like flowering body reminiscent of a pine cone, and strongly scented roots that are harvested to distill the essential oil [2]. Although calamus isn’t a remarkable plant visually, it is notable for coming in three genetic variants with different numbers of chromosomes [3]. The native North American variety, Acorus calamus var. americanus, is diploid, meaning it has two sets of chromosomes, while the Asian variety Acorus calamus var. angustatus is tetraploid, with four sets of chromosomes. An infertile triploid form, Acorus calamus var. calamus, is thought to have been created somewhere in the Himalayas by crossing the diploid and tetraploid calamus varieties. This infertile variety is now the most common calamus in Asia due to propagation by humans [3].

A mention of calamus essential oil as a perfume ingredient appears in the Chester Beatty Egyptian Papyrus IV dating from 1300 BC [3]. Calamus root also appears in the Old Testament (Exodus 30: 23-25) as an ingredient in holy anointing oil, in which it was steeped in olive oil along with cinnamon, cassia bark, and myrrh [4]. More recently, calamus roots were used as a strewing herb in the Middle Ages along with lavender in the belief their scent repelled fleas [1]. In Asia, calamus root was prized as a digestive tonic and was processed into several edible forms: calamus roots could be steeped in water to make a tea or decoction, boiled to make simple syrups and calamus candy, or simply chewed after meals [1].

Calamus root from Acorus calamus var. americanus had somewhat different uses among indigenous Native Americans. In North America, the whole calamus root was typically either chewed or held in the mouth beside the cheek. Calamus root was used to prevent or alleviate fatigue during long journeys, to calm the mind while removing fears and anxieties, and to improve focus during long sweat lodge ceremonies. Calamus was also taken as a lozenge to soothe a sore throat caused by the prolonged singing often involved in these ceremonies [2].

Today, calamus root and calamus essential oil appear in American herbalism as remedies for GI disorders such as upset stomach, flatulence, constipation, loss of appetite, ulcers, and gastritis [2]. The inhalation of calamus oil was also recommended in Ayurveda to relieve nasal congestion and as a prophylactic against the common cold [2]. However, while whole calamus root is edible, calamus essential oil can cause seizures and delirium if ingested and should never be taken internally. Pregnant or nursing women should also avoid calamus oil. Finally, calamus oil should always be used sparingly in dilution [1].

Emotionally, calamus oil has both stimulant and relaxant properties when its sweet-spicy aroma is inhaled; it can be used to calm anxious mental states and panic attacks, and is especially reputed for calming the physical symptoms associated with anxiety, such as dizziness and a queasy stomach [2]. Herbalists think calamus may work this way by acting as a mild muscle relaxant [2]. With its uplifting and warm scent, calamus essential oil is often used in Angel magic, white magic, and as a Sun scent in blends with cedarwood, frankincense, cinnamon, lime, orange, patchouli, and sandalwood.