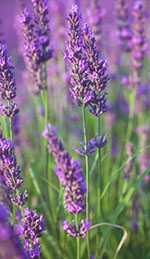 The daily demands and pressures of life can be quite distressing, in particular those demands that are work related. Work-related stress is a fact of life with which most individuals deal. Work-related stress not only negatively impacts work performance, but it can also adversely affect personal relationships as well. Stress from work can lead to fatigue, aching muscles, headaches, stomach problems, and emotional difficulties such as anxiety or depression. When you need to relieve work-related stress, you may want to consider using lavender oil.

Lavender (Lavandula angustifolia) is a flowering plant in the mint family Lamiaceae, with narrow evergreen leaves and upright, brilliant purple flowers which produce a richly aromatic essential oil. Native to Western Europe and the Mediterranean, lavender has been used in perfumery, as food, and as medicine at least since Biblical times; lavender was formerly named Lavandula officinalis due to its medicinal use [1].

Lavender oil is often held up as the most popular essential oil in the world, and there is a good reason why it has remained a staple in aromatherapy. The compounds in pure lavender oil provide antiseptic, anti-inflammatory, carminative, sedative and antidepressant effects [2]. The main therapeutically active compounds in lavender essential oil are borneol, 1,8-cineol, and camphor; it may sound like a simple combination, but research has shown that lavender oil possesses antibacterial activity even against some bacteria that are resistant to conventional antibiotics [2]. Other compounds in lavender oil include a-pinene, geraniol, limonene, p-ocimene, caproic acid, linalool, and linalyl acetate. Along with producing the sweet, woody-spicy scent of lavender [3], these last two compounds are also thought to give lavender essential oil its notable stress-relieving properties [4].

Using natural ingredients to combat the ill effects of stress is both safe and effective. Treating stress with chemicals, such as those found in antidepressants and over-the-counter medications, can be counterproductive to one’s overall health. Since many medications carry with them warnings of dangerous potential side effects, it seems only rational to opt for natural alternatives instead. Reducing work-related stress naturally can be better for your physical, mental, and emotional health.

Pure lavender essential oil contains linalool and linalyl acetate, two compounds that have been studied for their stress-relieving effects in mammals, including humans. Both lavender oil and its calming compounds, linalool and linalyl acetate, have been show to have sedating and anxiolytic effects in rodents [4, 5]; lavender oil also extends phenobarbital-induced sleep duration and prevents convulsions in mice [4]. Although researchers haven’t determined the mechanism behind these effects, one hypothesis is that the compounds in lavender oil interact with the brain’s GABA neurotransmitters, with regulate feelings of calm and sedation [4]. Additionally, lavender oil has been found to inhibit release of the stimulant neurotransmitter glutamate in the rat cerebral cortex [4].

The calming effects of lavender oil have also been studied in human subjects. Capsules of diluted essential oil of lavender have been approved as an anxiolytic in Germany under the name Silexan. A 2010 study comparing the anxiolytic effect of Silexan to conventional  drugs in the treatment of generalized anxiety disorder found that the lavender essential oil capsules had an anxiolytic effect comparable to that of a low dose of Lorazepam, a conventional anti-anxiety drug [6].

There are many ways in which lavender oil can be used to reduce work-related stress. The fragrant, calming vapors of this oil can be inhaled directly or the oil can be added to a hot bath. Most people can apply lavender oil directly on the skin without a carrier oil, but you may find after a patch test that you prefer to dilute the lavender oil with some jojoba or another base oil. The oil from the lavender plant produces a calm, soothing, and sedative effect that can restore balance to the nervous system, thereby promoting relaxation and uplifting one’s mood. It also blends well with other calming and uplifting essential oils such as neroli, jasmine, geranium, and ylang-ylang.