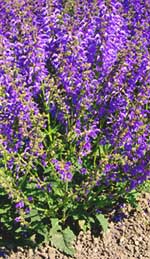 Clary sage is one of those ancient herbs that worked magic when it was put into the eye to relieve mucus, or when it was combined with Muscatel wine to produce a heightened level of intoxication. That ability earned it the title of “muscatel sage” in Germany. During the Middle Ages it was called “Oculus Christi” because it had the ability to clear foreign objects out of the eye and increase vision. In 16th-century England it replaced hops in the beer-brewing process.

The clary sage plant is native to Southern Europe, but it grows in the US, Russia, Morocco, England, and Central Europe. The plant has large heavy green leaves with a hint of purple, and the plant produces small flowers that are either blue or purple. The essential oil is obtained by processing the leaves and flowers using the steam-distillation method. Clary sage essential oil may have a yellow-green appearance, but it can also be clear, with a sweet, nutty-herbaceous scent.

The composition of clary sage oil is unique since it has a high content of esters, like lavender and petitgrain. Seventy-five percent of the ester is linalyl acetate. Esters are known for their anti-inflammatory properties, and they complement rather than impede the nervous system. One of the most unique qualities of clary sage is that it blends well with other oils like cedarwood, bergamot, lavender, geranium, sandalwood, roman chamomile, jasmine, orange, rosewood, neroli, and ylang-ylang.

The essential oils that result from various clary sage combinations produce some powerful aromatherapy treatments that help alleviate an assortment of physical and mental ailments. The rich portions of linalyl acetate as well as other phytochemicals like diterpene, sclareol, myrcene, flavonoids, and rosmarinic acid, make the oil an excellent fragrant compound.

The calming parasympathetic nervous system reaction to clary sage, especially when it is diluted in a warm bath, has been well documented in cultures around the world. This versatile aromatherapy oil has a compound similar to estrogen in its chemical components, so it balances hormone secretion, and that has a positive effect on the hair growth cycle. Clary sage oil helps reduce excess hair oil, and it stimulates dormant hair follicles so they return to the anagen (growing) stage in the hair growth cycle.

Clary sage oil is also used as an antiseptic for surgical incisions, wounds, and post-natal injuries. It is also a depurative agent that helps remove toxins from the blood through sweating. The oil is classified as an oral toxin, so it should be used with care, and should not be used during pregnancy since it contains camphene and camphor. Still, this powerful oil has the ability to help heal a variety of skin, hair, respiratory, and mental issues when it is used responsibly.