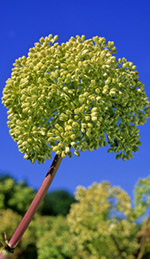 Humankind’s connection with nature is well documented through the centuries. Plants and trees have played a vital role in human mental and physical wellness, and they continue to present new avenues for general well-being and emotional stability. Angelica oil has been used for over five hundred years to cure a variety of physical issues, especially when flatulence and stomach issues create discomfort [1].

The angelica plant (Angelica archangelica) is native to European countries in colder climates such as Russia, Lithuania, and Norway [2]. Even the inhabitants of Iceland have had a close relationship with the angelica plant through the years. In Lapland the plant was considered inspirational, and in Norway it was used to make bread. The French developed liquor from the plant and also used it to flavor absinthe. Angelica has also been frequently associated with magical protection; one explanation for its Latin name, A. archangelica, states that the archangel Michael legendarily passed the plant down to humanity for its healing qualities [3].

Also known as Holy Ghost Plant, Wild Celery, and Garden Angelica, angelica is a flowering biennial plant in the Apiaceae family. It grows a tall upright stalk with an almost spherical cluster of white or greenish flowers at the apex [2]. Although angelica is traditionally gathered in the wild for use in medicine and cuisine, it is best to always get your angelica from a trusted vendor, as it can be similar in appearance to several toxic species [2]. Angelica essential oil is distilled from the plant’s seeds, and blends well with rich, pungent oils such as clary sage, labdanum, oakmoss, opoponax, patchouli, vetiver, and citrus oils.

Angelica oil is well known for relieving joint pain, indigestion, flatulence, bronchitis, and some reproductive issues in women [1]. Modern herbalists continue to rely on angelica oil to relieve muscle aches, rheumatoid arthritis pain, and stomach ailments. This essential oil is also used in lotions, soaps, and perfumes, but the aromatherapy value of angelica oil, especially when it is combined with sandalwood, myrrh, cedarwood, and frankincense, continues to increase as more people become aware of its healing qualities.

The fragrance of angelica oil is known to produce a sense of well-being. Negative feelings and emotions are released, especially when a traumatic event disrupts normal life experiences. This essential oil is used to connect the physical consciousness with the spiritual consciousness in some cultures, and that practice is growing in popularity due to the history of the plant and the oil. Some cultures even call it “The Holy Ghost Oil.”

The Chinese use angelica oil to promote fertility, and it is currently listed in the British Herbal Pharmacopoeia as a remedy for bronchitis, and a catalyst to increase circulation [1]. Other studies show that the oil has a positive effect on the adrenal glands. It can be also used as a nervine tonic when it is massaged into the solar plexus. The carminative effect of angelica oil strengthens the digestive system, and rebuilds body strength when a chronic illness depletes one’s energy [1].

It’s always best to test a small amount of angelica oil for skin sensitivity. It may be phototoxic, so the ultraviolet rays of the sun should be avoided when angelica oil has been applied to exposed skin [4]. The internal use of angelica oil may also interfere with anticoagulant drugs. Aromatherapists rely on the oil as an antispasmodic, diaphoretic, expectorant, diuretic, and depurative that can ease the discomfort of internal as well as external issues [1]. The essential oil from the root of the angelica plant is non-toxic and a valuable remedy. It has effectively earned the title, “The Oil of Angels” in the Western World.

1. Lawless, Julia. 1995. The Illustrated Encyclopedia of Essential Oils: The Complete Guide to the Use of Aromatic Oils in Aromatherapy and Herbalism. Rockport, MA: Element Books.