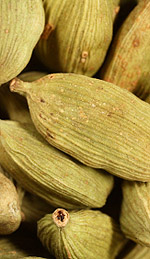 The Egyptians were big fans of cardamom oil. They used cardamom to whiten their teeth, and the oil was used in perfumes and for incense in religious ceremonies. When the Romans ate too much, they drank cardamom to aid digestion, and the Arabs mixed it in their coffee to enhance the aroma and flavor of the brew. The Chinese use cardamom for cooking, and cardamom and India have enjoyed a rich history because the Indians saw the export value in this incredible herb and the oil it produced.

India was the world’s number one producer of cardamom for centuries, but Guatemala took over as the number one exporter in the 1990s. Global output of cardamom vacillates between 30,000 and 35,000 tons per year when other countries like Sri Lanka, Vietnam, Cambodia, Laos, Papua New Guinea, and El Salvador are included in the total.

Cardamom is the second most expensive spice in the world. It’s right behind saffron, so there are many imitators in the spice market that masquerade as the real cardamom, which actually comes from the Elettaria cardamomum plant. There are two varieties of that plant in India: Malabar and Mysore. Mysore contains high levels of limonene and cineol so it is much more aromatic than the Malabar variety.

Cardamom oil is processed in India and sent to countries in Europe as well as other countries around the world. The essential oil of cardamom plays a key role in aromatherapy treatments, and in the preparation of medicines and food. The sweet and spicy aroma of this essential oil is the perfect massage or bath oil, and serves as a general tonic as well. It aids digestion, soothes the stomach, works as a laxative, and helps with nausea. The oil of cardamom is traditionally associated with sharp eyesight and sweet breath, and it also helps the circulatory system.

The aromatherapy qualities of cardamom oil are enhanced when it is combined with blood orange and bergamot oil, and rose, cinnamon bark, clove bud, caraway, and cedarwood oil are also excellent agents for blending purposes. The chemical properties of cardamom oil give it an almost balsamic fragrance, which is perfect for inhalers and steam aromatherapy treatments.

Over the years cardamom has earned the title “Grains of Paradise” because of its versatility, and its ability to help the body’s immune system function effectively. Cardamom oil is composed of calcium, iron, and resin abstract that help with inflammation, especially in the gums and mouth. Cardamom oil can be used effectively to control skin infections and acne. Some people use the oil as a sexual tonic because it relaxes muscles and the nervous system. Other people use it to help disintegrate kidney stones.