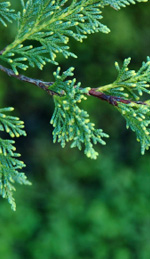 The Egyptians made sarcophagi from cypress, the Phoenicians and the Cretans used it to build houses and ships, and the Greeks used it to carve statues of their gods. The cypress tree has been an integral part of Western civilization for centuries. The tree is named after the Greek island of Cyprus, on which cypress trees grow in abundance, and where they were worshipped.

Early civilizations not only used the wood to make life more comfortable, they also steam distilled the branches and needles to extract oil from the wood, and used the oil medicinally. The Greeks valued cypress oil for the calming effect that it has on the nervous system, as well as for its ability to relieve and eliminate asthma symptoms and other respiratory troubles.

Through the years cypress oil has been credited with helping to alleviate symptoms of bronchitis, nosebleeds, fluid retention and muscle cramps, and the oil also has the ability to increase circulation, which is a vital factor in reducing cellulite. Cellulite is where the cells in the fatty layer under the skin are attacked by toxic lymph. If the lymphatic system is sluggish and circulation is poor, cellulite often appears on the upper arms, buttocks, and thighs as well as other areas of the body.

Anyone can develop cellulite. Excess weight is not the villain, but excess estrogen does play a role, and so does a weak lymphatic system. If the lymphatic system and the immune system are not strong enough to get rid of them, toxins are pushed to areas of the body where they will do the least harm. The result of that internal action is called cellulite.

When an alkaline detoxification diet is combined with aromatherapy treatments, cellulite begins to break down. Cypress essential oil is one of the main oils used in successful aromatherapy treatments. Cypress oil is combined with other essential oils such as clary sage, lavender, juniper, and lemongrass oils because they eliminate fluid retention. The blended cypress oil can be applied directly in a massage, diluted in a bath, and infused in a seaweed wrap during spa treatments.

Cypress oil is also used to treat varicose and broken veins and congested and oily skin. When the oil is blended with pine, marjoram, sandalwood, rosemary, frankincense and citrus oils in aromatherapy oil treatments, cypress oil can be very effective in assisting with emphysema, diarrhea, cramps, rheumatism, sweaty feet, whooping cough, and uncomfortable symptoms of menopause.