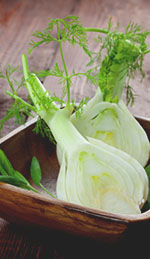 The Romans called fennel the “herb of sight,” and recent studies show that fennel does have potential in treating glaucoma. In India and Pakistan, fennel flavors spicy dishes, and is chewed as an after-meal breath freshener. China combines it with other spices, and the Lebanese use it along with onions and flour in a special omelet recipe called ijjeh. The Germans and Italians mix fennel with avocado and chicory in salads, and it’s even an ingredient in toothpaste. The oil has a sweet-spicy scent similar to anise oil.

Fennel (Foeniculum vulgare) belongs to the celery family Apiaceae, also known as Umbelliferae [1]. Considered by taxonomists to be the only species in its genus, fennel has feathery green leaves, small yellow flowers, and a swollen basal stem used in cooking for its anise-like flavor. The fennel plant is native to Mediterranean Europe and Southwest Asia, and has been naturalized in North America [1].

Fennel oil contains anethole, which explains why the oil is an essential part of aromatherapy. The polymers in fennel act as phytoestrogens, so the medicinal uses for fennel oil were established centuries ago. The present Chinese pharmacopoeia promotes fennel for vomiting, diarrhea, and abdominal pain [2]. The Ayurvedic pharmacopoeia recommends fennel for flatulent dyspepsia, anorexia, and colic in children [2].

Fennel was also known in medieval Europe as a medicinal herb and a good luck charm. The English word fennel comes from the Middle English fenel or fenyl. This was a distortion of the Latin name foeniculum, which was a diminutive of the word for hay, faenum. So fennel literally means “little hay” because of its hay-like appearance! However, the English believed fennel to be of use to humans as well as livestock: fennel was one of the nine herbs in the Anglo Saxon Nine Herbs Charm used to ward away evil, along with wormwood and thyme.

Modern therapeutic applications for fennel oil are based on the past history of the essential oil as well as established medical reports, phytochemical investigations, and various other studies [2]. The results of those studies have made fennel oil a mainstream component in cough syrups, and carminative component in bowel and stomach remedies. Some people use fennel oil as a diuretic and a treatment for hypertension [2].

The first society to recognize the slimming attributes of fennel oil was ancient Greece. The Greeks drank a cup of fennel tea fifteen minutes before eating a meal and noticed a definite difference in their appetite. They decided that fennel oil fine tuned the digestive system so that food was turned into energy instead of fat.

That thought process is not a myth or old wives’ tale: fennel essential oil does remove blockage that impacts the liver, spleen, gall bladder, kidneys, and stomach [2]. The antimicrobial properties of fennel oil promote weight loss in aromatherapy treatments, and it treats gas, bloating, and indigestion at the same time [2]. Fennel oil may also be beneficial in treating the pain and discomfort associated with dysmenorrhea [3].

The expectorant qualities of the oil thin out excess mucus, which helps treat respiratory issues that reduce energy levels and slow down normal cell regeneration [2]. When energy is not converted to action of some kind, it is stored in adipose cells as fat. Fennel oil stimulates those cells and converts the fat back to energy.

In order to be effective in the fat-burning process, fennel oil impacts the metaphysical portion of the self as well. Fennel essential oil has the ability to enhance personal courage and strength. Those thoughts help the body burn fat [4].

The metaphysical explanation for this fat-burning process is that fennel oil keeps negative energy at bay so that positive energy manifests. The body reacts to positive energy by burning fat stored in cells in the stomach, thighs, and legs. Modern medicine is slowly recognizing metaphysical beliefs, and is using modern tools to measure fennel oil’s effectiveness in promoting weight loss.

3. Namavar Jahromi B, A Tartifizadeh, S. Khabnadideh. February 2003. “Comparison of fennel and mefenamic acid for the treatment of primary dysmenorrhea”. International Journal of Gynaecology and Obstetrics 80 (2): 153-7.