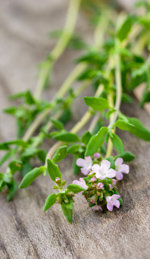 Thyme oil has a long and fascinating history of use. The Egyptians would never have been able to embalm their departed loved ones so successfully if it weren’t for thyme oil. The early Romans identified thyme oil as a medicinal as well as a culinary oil. Italy is still famous for its many delicious foods featuring thyme, and the locals still use the oil to cure stomach issues, wounds, and insomnia.

The Greeks liked the smell in perfume so they named the plant ‘thymos,’ which means ‘to perfume.’ In fact all the ancient societies that enjoyed the beauty of the Mediterranean region grew thyme to heal an assortment of skin, stomach, and circulation problems.

These ancient cultures learned early on that thyme could be blended with rosemary, oregano, cedarwood, black pepper, eucalyptus, juniper, bergamot, lemon, lavender, marjoram, grapefruit, pine, peru balsam, tea tree, and peppermint oil. Using such combinations,  most of the mental and physical issues that impede quality of life may be healed, cured, or relieve with a homemade concoction of oils.

During the Middle Ages thyme oil was given to jousting knights for courage, and wreaths of thyme were placed around rooms to fight infections and diseases. The world fell in love with thyme essential oil such a long time ago that it is not surprising that the plant is so widely cultivated. Spain is still the main supplier, but Portugal, France, Greece, Israel, and the Western part of the US produce a large amount of thyme oil as well.

The name red thyme comes from the reddish-brown to amber color of the oil. The rich chemical components are thymol, linalool, camphene, a-thujone, a-pinene, b-pinene, p-cymene, a-terpinene, b-caryophyllene and borneol.

The therapeutic properties are antiseptic, antispasmodic, carminative, bactericidal, cardiac, cicatrisant, diuretic, expectorant, insecticide, stimulant, emmenagogue, vermifuge, hypertensive, and tonic, so the oil relieves a long list of unwanted health issues when it’s used in aromatherapy. The caryophyllene and camphene compounds in the oil provide its antiseptic qualities. It has thus been used around the world for years to keep sores and wounds from getting infected. Thyme oil still holds its place as an effective aromatherapy treatment for heart, stomach, and circulatory issues as well as for preventing infections resulting from animal bites and insect stings, plus it kills intestinal worms and hook worms.