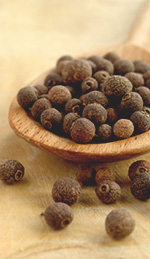 The allspice tree is one of those finicky members of the plant family that only grows in certain areas of the world. Jamaica is well known for allspice tree growth, so much that at one time it was believed that allspice trees grew only on Jamaica! But some South American countries including southern Mexico, the greater Antilles, and areas of central America have also been successful in growing and harvesting allspice berries. Different types of allspice berry oil are made using not only the berries, but the stems and leaves as well.

Allspice is Pimenta dioica, a tropical mid-canopy tree with broad shiny green leaves, white flowers, and tiny round green allspice berries that look like large brown peppercorns when dried [1]. Allspice was the name English settlers gave to the tree based on their belief that the dried fruits tasted like a mix of nutmeg, cinnamon, and cloves, three very popular spices from the Moluccas in Indonesia [1]. Allspice is also called Jamaican pepper, English pepper, pimento, myrtle pepper, and newspice [1].

While ground allspice can be bought in most grocery stores, gourmands often prefer grinding their own whole allspice berries just before using them in recipes, in order to preserve the flavorful essential oils in the dried fruit. With its complex, clove-like flavor, allspice is a staple when it comes to flavoring classic desserts such as pumpkin pie, gingerbread, and pastries [1]. In Middle Eastern countries, allspice is used to flavor curries, and it imparts its sweet-spicy essence to classic Mexican and Caribbean dishes such as molé sauce and Jamaican jerk seasoning [1].

Allspice essential oil is made from the green allspice berries, which are gathered just before they are ripe and then sun dried. When allspice berries are steam distilled, very light and very heavy chemicals emerge, including eugenol, methyl eugenol, cineol, phellandrene, and caryophyllene [2].  Those chemicals are combined in allspice berry oil. Leaves and stems are also used to produce allspice oil, but the berry distillation process produces better oil. The end product doesn’t contain as much eugenol, so it’s kinder to sensitive skin.

The initial harvest of green allspice fruit takes place when the trees are eight years old. Ripe fruit loses its scent, so there is a time element involved in producing quality allspice essential oil from the soon-to-be-ripe fruit. Essential allspice berry oil can be combined with leaf and stem oil as well as clove oil. This mixture produces a fiery oil, and it should be used with care.

For centuries allspice berry oil has been used to treat insect bites, headaches, colds, muscle distress, aching joints, indigestion, and sinus issues [2]. It’s well known for its antioxidant value [3], so long-term users stand behind the claims that the oil reduces the signs of aging. Allspice berry oil is used to improve vision, to stop hair loss, improve hearing, and to relieve nervousness and mild anxiety [2]. The analgesic and anesthetic properties provided by the tannins in allspice berry oil [4], as well as the warming, cheering, and comforting effects of the oil, make it a rock star in the aromatherapy world.

The warm, spicy-sweet aroma, and balsamic body note of allspice cultivate a scent of pepper, nutmeg, clove, and cinnamon. Allspice berry oil is frequently combined with lavender, ginger, geranium, ylang-ylang, neroli, sweet orange, bergamot, and patchouli to enhance its healing properties, improve sleep patterns and to bring a sense of euphoria to each moment in the now.

The possible cancer-preventing as well as the carcinogen-inhibiting qualities of the oil [3], plus the antibacterial, digestive, and circulation benefits of allspice essential oil [2] puts it in a unique class of aromatherapy oils that have an impact on the physical, mental, and spiritual aspects of the human psyche.

Allspice berry oil is used in a mist spray form as well as a massage oil and an inhaler. Steam inhalation and adding the oil to a bath are also popular ways to use this versatile oil that can reduce cellulite, relax the body, relieve cold symptoms, and reduce annoying flatulence. Care should be used when working with allspice oil topically, as the eugenol content means it can be irritating to sensitive skin as well as mucous membranes [5]. Allspice oil should always be diluted in a carrier oil before use. People with hemophilia or liver disease should consult a doctor before using allspice berry oil [5].

In this modern age, allspice berry oil tops the list of natural aromatherapy essential oils that can help the cells regenerate without frustrating side effects.