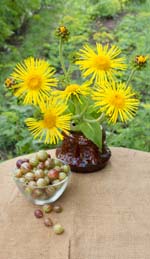 The Egyptians fell in love with the spikenard plant thousands of years ago. The oil from the plant was used to anoint powerful individuals because of its reputation as a powerful healer. The oil was also known for its spiritual properties, as well as for its ability to relax the mind and allow for a higher level of awareness.

The Hebrew use of spikenard oil is well documented in the Bible.  Mary anointed the feet of Jesus with pure nard, which is another name for the oil. Nardin and muskroot oil were other names used to describe the oil. Nard oil had a variety of uses back then. It was a sedative, it was used in incense, and it was said to purify the spirit and the soul. The Greeks called it naardus after the Syrian city of Naarda, and the Indians used it in Ayurvedic healing.

The powder of spikenard is mentioned in Islamic texts as the fruit that Adam ate, and the Europeans found it a delightful ingredient, which they used to add a touch of spice to a drink called Hypocras, which is a sweet and spicy wine. The 17th-century European beer called Stingo had spikenard in the ingredients, as well. In Tibet, spikenard is still used in ceremonial incense.

One of the main benefits of using spikenard essential oil as an aromatherapy oil these days is to improve circulation. The circulatory system is the main transportation system in the body. Spikenard helps clear the impurities that enter the bloodstream from food and the environment. Another important benefit of using spikenard oil is to nourish, soothe, and regenerate the skin. When spikenard is massaged into the solar plexus and over the heart, the warm and earthly aroma relaxes the body and the mind, and a change of focus often occurs.

The oil instills a profound sense of peace, and releases the deepest form of anxiety when it is inhaled. Spikenard blends well with pine, lavender, lemon, vetiver, clary sage, neroli, and patchouli oil. The chemical components in this amazing oil are valeranone, tetramenthyloxatricyclodecanol, bornyl acetate, 1,8-cineol, jonon, and menthylthymyl-ether.

The rejuvenating qualities of spikenard oil on mature skin are legendary, and the healing properties of the chemicals within the oil can make skin rashes disappear, especially when the oil is mixed with olive oil.

Spikenard oil is a modern marvel when it comes to regulating the heart and cleaning the circulatory system. It’s an old remedy that holds a mixture of spirituality and physical health benefits in every drop.