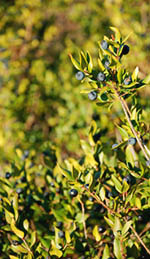 If you’ve ever been to a formal English garden, you’ve probably seen myrtle (Myrtus communis) without even knowing it. Because of its dense foliage and springy branches, myrtle is favorite plant of topiary artists, along with holly, privet and bay laurel. A large fragrant bush native to North Africa and Southern Europe, myrtle has been a staple of herbalism and folklore in this region for millennia. In aromatherapy, myrtle essential oil is usually diffused as a general antiseptic and expectorant to clear sinus congestion [1], and used topically as a skin tonic [2]. The oil is a pale yellow to orange mobile liquid with a fresh, herbal-camphoraceous odor reminiscent of eucalyptus.

The myrtle bush grows up to 5 meters (16 feet) tall and has lance-shaped leaves, small white flowers, and dark purple berries; rarer varieties also produce pale yellow or amber berries. In Greek, Roman and Jewish traditions, myrtle symbolized renewal and love: the herb was sacred to Aphrodite, goddess of love (called Venus in Roman times) and to Demeter, the goddess of the harvest. Relatedly, myrtle has remained one of the plants traditionally associated with matrimony in Europe and the Mediterranean Middle East. Since the plant was associated with virility and the masculine forces of the universe, girdles of myrtle leaves were often given to Jewish bridegrooms on their wedding nights, and the leaves and flowers still appear in wedding bouquets today [3].

An equally lively use for myrtle involves harvesting its leaves and berries and steeping them in alcohol to create a fragrant liqueur called mirto, a popular libation on the Southern Italian island of Sardinia, and also in Corsica. Mirto comes in two varieties: mirto rosso, or “red” mirto, made from the mytle plant’s dark purple berries; and mirto bianco, or “white” mirto, derived from myrtle leaves and sometimes the rarer yellow berries. The practice of making mirto may be connected to myrtle’s medicinal uses in the Mediterranean: Dioscorides, a Greek physician credited with creating the first Western compendium of herbal medicine, recommended a potion of myrtle leaves in wine for treating bladder and lung infections [2].

According to the 16th-century physician Culpeper, myrtle leaves have drying and binding properties and are suitable for treating diarrhea and dysentery [4]. They were also a primary ingredient in Angel’s Water, a 16th-century skin care tonic [1]; it was at about this time, with the invention of the greenhouse, that myrtle bushes were first sucessfully grown year-round in England for use as topiary plants. 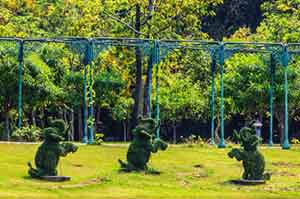 Topiary often assumes fanciful shapes, such as these topiary elephants in a tropical park near Bangkok, Thailand.

Today, myrtle is cultivated throughout the Mediterranean for its essential oil. Besides its tonic benefits for the skin, myrtle essential oil can be diffused to treat colds, congestion, and persistent coughs [1]. Myrtle essential oil is currently being researched as a potential herb to support the thyroid gland [5], and it may also be useful in tamping down an overactive thyroid. There has also been extensive research on two compounds in the stem and leaf, Myrtucommulone A and semimyrtucommulone B, demonstrating significant antioxidant properties in lab tests [5]. As a perfume, the refreshing, slightly sweet scent of myrtle blends well with herbaceous and slightly spicy oils such as bay, clary sage, clove, hyssop, lavender, rosemary and thyme.