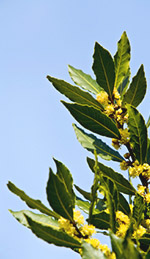 Perhaps no other plant holds as storied a place in Mediterranean history as the bay laurel tree (Laurus nobilis). Not be confused with the Caribbean bay tree, the bay laurel is an evergreen tree or shrub with lance-shaped, shiny green leaves. It is native to the Mediterranean regions of Greece, Italy, and West Asia. Bay laurel essential oil is renowned for its ability to stimulate appetite and digestion, and has a variety of ancient uses as a food and medicinal herb.

The bay laurel tree appears in the Bible and in Greek and Roman myth. In the ancient Mediterrean world, the bay laurel was the symbol of victory: victors in the ancient Greek Panhellenic games (the precursor to our modern-day Olympics) were crowned with wreathes of laurel leaves to commemorate their achievement. This practice gave rise to the saying, “to rest on one’s laurels”. Laurel leaves have continued to be associated with achievement up to the present day—we still use laurel symbolism to denote people who have earned a college degree as baccalaureates, meaning “those crowned with laurels”.

Why is the bay laurel so firmly linked to accomplishment in ancient and modern minds? For one thing, bay laurel oil and leaves were sacred to the Greek god Apollo, the father of poetry and artistic endeavors. Furthermore, the scent of bay laurel oil is widely thought to stimulate creativity, inspiration, and confidence [1].

The bay laurel tree also left a lasting impression on Mediterranean cuisine and herbalism. Along with thyme, oregano, and rosemary, dried bay leaves have been one of the key ingredients in pasta sauce even before the tomato was brought over from the New World. Because they are rigid and can have sharp edges, whole bay leaves are inedible and must be removed from sauces before eating. However, bay leaves are often ground up to render them edible and added to Bloody Mary cocktails for a distinctive savory flavor.

Bay laurel oil or the fresh leaves have also been used as a wound salve [2], appetite stimulant [3], and an expectorant to clear respiratory congestion [4]. A poultice made of boiled bay laurel leaves was a common folk remedy for skin rashes caused by poison ivy, poison oak, or stinging nettles [2]. Since bay laurel oil can cause skin sensitization, it is best used in dilution. Try mixing a small quantity of bay laurel oil with other camphoraceous, fruity or spicy oils such as lavender, frankincense, cypress, or clary sage. Or you can diffuse bay laurel oil directly from an oil burner to aid your concentration, mental clarity, and confidence!