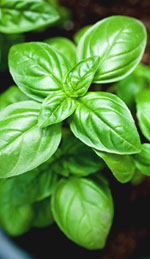 Basil oil and basil leaves share a rich history with modern humans. Indigenous societies were the first people to discover the amazing properties of basil and the oil derived from the plant. It has been cultivated around the world for thousands of years. During the early years it was also used to treat headaches as well as to enhance the sex drive.

Pliny, the Roman author and naturalist, claimed it was an aphrodisiac, and the Greek physician Dioscorides prescribed it for headaches, but his contemporaries used it as horse feed during breeding season. In modern aromatherapy, basil oil is used to lift the spirits and cheer the mind, especially when melancholy and sorrow overwhelm active thoughts.

Being a polymorph, basil oil comes in different strengths and is offered in a variety of scents and compositions. Scented basil oils range from lemon, clove, and cinnamon in aroma, and when green and purple curly lettuce leaf basil plants are steam distilled, they yield another type of oil.

There are two varieties that are used to extract large quantities of  basil essential oil in this modern aromatherapy era. The first variety is Exotic basil, which is grown and distilled on Reunion Island in the Indian Ocean. The European type of basil is also used to produce commercial essential oil. It was originally harvested and distilled in Southern France, but is now cultivated in America as well. The constituents that give basil oil its flavor and aroma are methyl chavicol, linalool, and eugenol.

Reunion basil contains camphor but very little linalool. It has a harsh, woody aroma and is not used on its own in aromatherapy, since those qualities don’t conform to the energizing and refreshing elements found in a sense of well-being. Basil oil is often mixed with lavender, geranium, clary sage, and bergamot to give it balance and a more pleasing aroma. Sensitive skin may react to the methyl chavicol, so basil oil is often diluted with another carrier like vegetable oil to prevent skin redness.

The basic uses for essential basil oil are to stimulate the adrenal cortex, decrease anxiety, depression, and fatigue, and to treat symptoms of bronchitis, indigestion, gout, fever, and colds. It has hot and cold qualities that can pep up circulation or invigorate sluggish skin. When basil is combined with thyme, it’s a powerful antiseptic.

In aromatherapy, basil oil is used in baths, inhalers, massages, and facial masks. Basil is still popular as a culinary seasoning, but the essential oil of basil is a valuable friend that can help relieve common cold symptoms as well as rejuvenate and promote emotional stability. Basil has been a soul protector as well as a body protector for centuries. It’s no wonder the early Egyptians offered it to the gods.