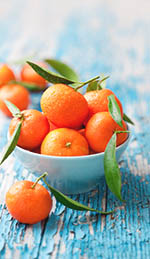 Tangerine… even the name of this luscious citrus fruit conjures up impressions of all that is tangy, sweet and juicy! These thin-skinned orange relatives have been enjoyed in drinks, desserts and main dishes for centuries in East Asia, and Christmas wouldn’t be the same in many regions of the British Commonwealth without a basket of tangerines in the kitchen. Aromatherapists use tangerine essential oil to lift seasonal depression, stimulate circulation, and as a digestive tonic [1]—and that’s just for starters!

The tangerine tree (Citrus reticulata) is an evergreen slightly smaller than a sweet orange tree, with shiny green leaves and smallish fruit with a reddish orange peel. The name “tangerine” comes from the port of Tangiers in Morocco[2] (the first port to grow tangerines for export to Europe), and literally means “of or from the region of Tangiers”!

Tangerines are techinically a variety of the mandarin orange, and can be told apart by their deeper orange color and lack of seeds: mandarin oranges have a yellow-orange peel and do contain seeds, called pips. Tangerines are also harvested in November, while the mandarin harvest occurs in February. Other varieties of mandarin include the clementine and the satsuma, named after the Satsuma region of Japan where it was first developed[3].

Along with the pomelo, citron, and papeda, the mandarin is also believed to be one of the four original species that were hybridized to produce all other citrus species, such as the lime, lemon, and sweet orange[3]. Interestingly enough, the mandarin is the only one of these four original species that is naturally sweet, as is its varietal the tangerine! Easy to peel and eat by themselves, tangerines are also added to fruit salads, desserts, main dishes, and squeezed to make juice. In Sichuan cuisine, the tangerine peel is dried and used as a zest in certain curries.

Tangerine essential oil is an orange-yellow liquid with a sweet, tangy aroma. The therapeutic compounds in the oil include a-thujone, a- and b-pinene, camphene, sabinene, myrcene, limonene, y-terpinolene, linalool, citronellol, terpineol-4-ol, nerol, and geraniol [2]. The primary use of tangerine oil in aromatherapy is as a nerve tonic with a calming effect on the emotions; it’s often inhaled from an oil burner or diffuser to relieve feelings of being “down” or “blue”, especially the seasonal depression commonly associated with winter[4]. As a gastric stimulant [1], tangerine oil is also used to treated conditions such as indigestion, flatulence, constipation, and diarrhea. The oil can stimulate circulation in the body, reducing edema and fluid retention [1], and has been used in massages to reduce and prevent the appearance of stretch marks. Like other citrus oils, particularly grapefruit and lemon, tangerine essential oil is also cleansing to the lymphatic system[5].

When using tangerine oil in a topical application, care should be taken to avoid exposing the treated skin to sunlight for at least 24 hours after treatment to avoid possible photosensitization [1]. Tangerine oil is considered generally non-sensitizing and non-irritating, but it should always be diluted before use and patch-tested on a small area of skin. With its tangy citrus scent, tangerine essential oil blends swimmingly with other citrus oils such as bergamot and neroli, floral scents such as lavender and clary sage, and spicy or balsamic oils such as frankincense, cinnamon, nutmeg and clove, for an energizing synergy that just gives a boost to your day!